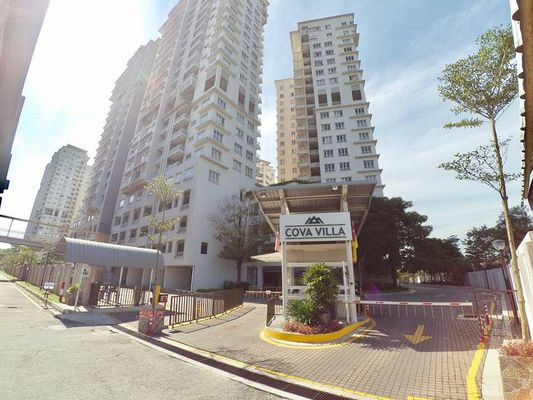 Located in Kota Damansara, Cova Villa is a serviced apartment project developed by Pharma Exel Sdn Bhd, a subsidiary of Andaman Group. The leasehold development is part of Cova @ Kota Damansara, an integrated development comprising Cova Suites and Cova Square business centre. Location
Cova Villa is surrounded by high-density residential and mature areas, such as Bandar Utama, Damansara Perdana, Taman Tun Dr Ismail, Damansara Jaya, Damansara Utama and Mutiara Damansara. The project is situated in the vicinity of International University College of Arts and Science (IUCAS), SEGi College, The TreeHouse Islamic Playschool and Sri KDU School, and only 10 to 15 minutes driving distance away from shopping complexes like 1 Utama, The Curve, Ikano Power Centre and Ikea. It is also close to leisure and medical facilities such as the Cathay Cineleisure, Selangor Polo and Country Club, Tropicana Golf and Country Club and Tropicana Medical Centre. It can be accessed through numerous highways, namely New Klang Valley Expressway (NKVE), Damansara-Puchong Highway (LDP), North-South Expressway (NSE), SPRINT and Penchala Link Highways. Analysis
The property in the vicinity of education institutions will always be in demand due to the constant infusion of new students. As such, Cova Villa is poised to offers decent rental returns to owners as the project will reap the benefits from SEGi College, IUCAS, The TreeHouse Islamic Playschool and Sri KDU School. Furthermore, the shopping malls and amenities nearby will offer residents a very convenient way to get their necessities without travelling very far. However, the project might not be suitable for family living due the minimalist design targeted for student rental. And because of this, one might have to bear with students who are sometimes messy and rowdy in the building. Meanwhile, the flip side of being well-connected to a few major highways is traffic congestion, especially during peak hours. According to data from TheEdgeProperty.com as at end-June 2016, from the period of 1Q2012 to 2Q2016, the highest average transacted price for Cova Villa was recorded in 1Q2016, at RM550,000. The 22 listings from TheEdgeProperty.com as at Nov 18, 2016 showed that the average asking price was RM452 psf while the 31 listings on the portal showed that the average asking monthly rent was RM1.80 psf. The indicative rental yield is 4.77%.
Property Type
Hotel/Service Apartment
No of block
3
Total Units
346
Beds
3 - 4 bedrooms
Built up
743 sqft - 2852 sqft
Tenure
Leasehold
Land Area
10.86 Acre
Transacted Price
RM 50,000 - RM 1,000,000
Asking Price (Sale)
RM 415,000 - RM 550,000
Asking Price (Rent)
RM 1,500 - RM 2,100
Maintenance Fee
RM 0.25 psf
Developer name
Pharma Exel Sdn Bhd

Note: Transactions with the same address are matched. Profitability of each round-trip transaction is based only on the change in asset price and does not take into account transaction costs and the effect of financing. Unit numbers are not disclosed. In addition, there are 18 more profitable transactions.

Note: Transactions with the same address are matched. Profitability of each round-trip transaction is based only on the change in asset price and does not take into account transaction costs and the effect of financing. Unit numbers are not disclosed. In addition, there are 3 more unprofitable transactions