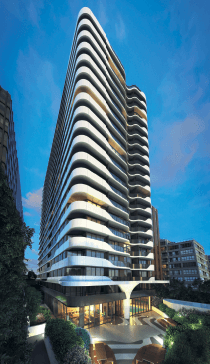 VOTED as the most liveable city in the world for the fourth year in a row by the Economist Intelligence Unit’s liveability survey, Melbourne has become a magnet for visitors and investors. With demand accelerating in the city’s property market, many new projects are coming up, offering investors a lot of choice.

Boutique development Queens Domain is the latest addition to the Melbourne property market. The developer of the 20-storey residential block with a gross development value (GDV) of A$183 million is Kangoala Pty Ltd while its project manager is Property Development Analysis Australia (PDA Australia).

Located next to Albert Park, one of Melbourne’s most famous parks, the development is 10 minutes away from the central business district (CBD). According to Sarah Harding, director of Knight Frank Asia Pacific international project marketing, the location of the development makes it very appealing as it is not only within walking distance of key places but is also accessible via the tram network.

“Not only that, some of the apartments would have views of the ocean (St Kilda Beach). The top floor has a rooftop residential terrace for the residents and their guests to relax and entertain and a barbecue pit. It also offers great views of the CBD, Albert Park and St Kilda Beach.

“Compared with other high-rises, Queens Domain only has 20 floors. So I would not classify it a high-rise. This is a boutique development,” she says.

Harding says the company was surprised to receive a number of enquiries from foreign investors about the penthouses. “We just assumed that the people who bought them would be those who lived in Melbourne. But we’ve had enquiries from Hong Kong and Singapore in the last few weeks.”

She adds that the popularity of the units could be due to the location of the development. “This development just offers lifestyle. It’s convenient for the local market — I mean you have the park at your doorstep, you can almost touch the golf course and, of course, St Kilda, which is very trendy.”

Launches were held exclusively for Asia first in Singapore, then Hong Kong, China and Malaysia in November. The launch in Melbourne is scheduled for February next year.

“Malaysians have an affinity with Melbourne. Education for their children and the number of the universities there and so on would explain why the reception to Queens Domain has been good as well,” Harding points out.

The Melbourne market is very competitive at the moment. “If you read the newspaper, each week there are so many negative stories about oversupply in the market right now. But I think in the long term, you need to look at the population growth. I think in the next 10 to 15 years, Australia will overtake the average world population growth and in the next 10 years, Melbourne is going to grow and exceed Sydney in population,” observes Harding.

This is further supported by data from the Australian Government Department of Immigration and Border Protection — the total number of migrants to Australia rose from 168,623 in 2009/10 to 190,000 between 2012 and 2014. Another 190,000 people are expected to migrate to Australia in 2014/15. Apart from that, the Australian Bureau of Statistics predicts that by 2031, Melbourne’s households would have increased from 1.62 million now to 2.11 million. 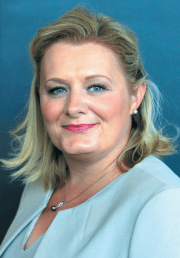 According to Harding, the main areas of Australia like Sydney, the Gold Coast, Melbourne and Perth are seeing a lot of infrastructural growth and developments. Melbourne, in particular, has always been an attractive destination.

“Investors need to be sensible about their purchases and their intention for the purchase. If it’s investment for your children to go to school and live in, then you need to look at it long term — pick a property that you are happy living in. If it is purely for investment purposes, you need to look at the rental market and who your competitors are.

“It’s important to factor in things like how many landlords you are competing with and when it comes to resale, whether you are going to sell to another investor or a local buyer. In Australia, if you are not a local buyer, you can only buy new stock that adds to the existing housing supply. It should be suitable for the local Melbournian or Australian to buy,” she points out.

“Melbourne simply feels like the European capital of Australia and there’s always going to be foreign investors, many nationalities and many cultures. When I meet buyers, they want to know the best option for them. Australia, in particular, is always on the radar screen of investors and you get value for money.”

On the other hand, there has been much negative press on how foreign investors are causing house prices to go up, thus making it unaffordable for the local market. “There’s a great debate on this. I think it’s important to remember that foreign investors spend money on education, schooling, medical treatment and retail, which helps boost the economy,” says Harding.

So, which are the hot spots for investors right now? London, New York and Sydney and Melbourne, in that order, remarks Harding. “We predict that next year, a number of European cities will be promoted in Asia because the Chinese are becoming more adventurous and venturing into such cities as Berlin and Hamburg. We have had requests for investment opportunities there.”