KUALA LUMPUR: Mah Sing Group Bhd reported net profit of RM23.04 million in its second quarter ended June 30, a decline of 38% from RM37.25 million a year ago mainly due to timing mismatch but it was optimistic about its outlook with remaining gross development value and unbilled sales of approximately RM4.4billion.

For the first half, net profit was RM45.67 million compared with RM59.55 million in the previous corresponding period while revenue seclined to RM317.55 million from RM336.08 million.

Mah Sing said its "projects currently have a remaining gross development value and unbilled sales of approximately RM4.4billion which will ensure earnings visibility for the next eight years".

On the performance, it had overshot its full year sales target by 1.2 times, achieving RM543 million sales in just 7 ½ months, including an en-bloc sale of its Corporate Block in Southgate for RM226 million.

Unbilled sales from residential and commercial projects as at June 30, as well as the en-bloc sale stood at RM818 million, about 1.6 times the full year revenue recognized from the property division last year.

"Niche products with good branding coupled with the right concepts and designs in prime locations will continue to do well," he added.

"We believe that the property market is gaining momentum for a likely up cycle in the second half of 2010, and are putting our money where our mouth is by going on an acquisition trail.  We have recently acquired 115 acres of land for a medium to high end, gated and guarded project in Cyberjaya named Garden Residence, and are on the lookout for a few more pieces of land in our key markets.”

On the property sector outlook, an upbeat Leong said a conducive financing environment with low interest rates and good financing packages had improved affordability for Malaysians.

He said Bank Negara’s data released in end July showed demand for financing continued to increase mainly due to higher loans for the purchase of residential properties and the extension of personal loans.  Improved equity market sentiments would help boost wealth effect and "the property market is gaining momentum for a likely up cycle in the second half of 2010".

“Low interest rates, a buoyant stock market and better consumer sentiments have combined to boost demand for properties.  Property prices are likely to rise in the liquidity-induced asset price inflation.  There is plenty of liquidity in the banking sector as Malaysians have very high savings rates.  This can be seen by the oversubscription of government backed funds and overwhelming response to some of the recent launches," he said.

Leong said Mah Sing was working very hard to maintain its performance and improve sales by riding on its branding, concepts and products. 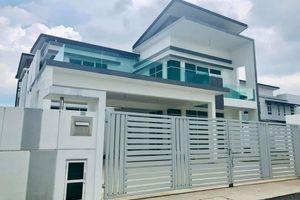