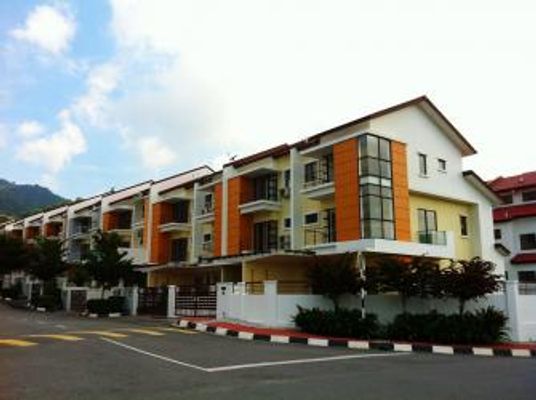 Setia Pearl Island, launched in early 2007, is a 112.6-acre development in Sungai Ara, Penang, occupying the site of what used to be the Pearl Island Country Club. It consists of six different zones, which are conceptualised as idyllic isles in a tropical dream island, each with their own distinctive character and appeal. The first of the six zones to be launched was the Isle of Life, featuring five designs of 20 ft x 70 ft 3-storey terrace houses built facing a lake. Targeted at larger families, these houses come with five bedrooms and four bathrooms, as well as a built-up area ranging from 2,337 sf to 2,720 sf. Isle of Aroma, the subsequently launched zone, offered five terrace house designs, also sized at 20 ft x 70 ft land area. The development also established a show village, named the Isle of Palm, which features 3-storey semi-detached houses of 2,155 sf to 3,975 sf. Out of the 30 units, 14 are new exclusive houses, with the rest functioning as show units. Other zones are the Isle of Discovery and Isle of Views (both yet to be launched), as well as the Isle of Conifer, with 3-storey terrace and semi-detached houses set amidst a beautifully-landscaped setting, overlooking a meadow of pines, spruces and fir trees. Setia Pearl Island is served by 24-hour security services, CCTVs and a clubhouse with extensive facilities such as a swimming pool, outdoor Jacuzzi, squash and tennis courts, a gymnasium and ballroom. Within Setia Pearl Island, you can also find Reflections, a 25-storey condominium tower with 315 units of 1,077 sf to 1,512 sf, as well as the Setia Tri-Angle, a freehold mixed development completed in 2015 comprising 72 SoHo units, retail lots, corporate suites and 225 units of low-rise residences. From the highly-accessible Setia Pearl Island, it takes barely 10 minutes to reach the Penang International Airport. The development is 9 km to the Sultan Abdul Halim Mu'adzam Shah Bridge, otherwise known as the Penang Second Bridge, and 15 km to the Penang Bridge. Setia Pearl Island is also conveniently located close by the Tun Dr Lim Chong Eu Expressway (Jelutong Expressway), Bayan Lepas Expressway (BLE) and various other schools, colleges, universities, shopping complexes, hotels and hospitals. Credit : Propsocial 12.11.2019
Property Type
Terraced House
Beds
3 - 6 bedrooms
Built up
646 sqft - 5070 sqft
Tenure
Freehold
Transacted Price
RM 42,000 - RM 3,502,575
Asking Price (Sale)
RM 880,000 - RM 1,699,999
Asking Price (Rent)
RM 2,000 - RM 2,000
Developer name
SP Setia Sdn Bhd

Note: Transactions with the same address are matched. Profitability of each round-trip transaction is based only on the change in asset price and does not take into account transaction costs and the effect of financing. Unit numbers are not disclosed. In addition, there are 15 more profitable transactions.

Note: Transactions with the same address are matched. Profitability of each round-trip transaction is based only on the change in asset price and does not take into account transaction costs and the effect of financing. Unit numbers are not disclosed. In addition, there are 5 more unprofitable transactions