Desa ParkCity is a modern and award-winning township located approximately 30 minutes away on the outskirts of Kuala Lumpur central business district. The township sits adjacent to established neighbourhoods such as Bandar Menjalara and Kepong to the north, Segambut and Mont’Kiara to the east and Bandar Sri Damansara to the west.

Developed by a boutique developer, Perdana ParkCity -- a subsidiary of Sarawak-based Samling Group, Desa ParkCity pioneered the concept of New Urbanism in the Malaysian property landscape by creating a visionary master-planned community. The success of Desa ParkCity goes back to 1999, a year after the 1997/98 Asian financial crisis, when the group CEO saw huge potentials in the wasteland.

Being an active quarry then, the soil condition was poor and subterranean rocks (granite) made construction and landscaping a challenge. The developer had to remove the rocks but to preserve its eco heritage, some of them are featured on the façade on the township today.

Covering 473 acres of freehold land, it is hard to imagine how the former quarry mine where no plants could grow is now a model township with two man-made lakes teeming with fishes and aquatic plants that have become popular recreational areas for its residents and even the public. There are a total of 36 residential and commercial phases in Desa ParkCity. Over the years, the company has built 3,390 homes and currently another 1,672 are under construction.

Due to its successful brand integration with attractive components of upscale contemporary living: residential, commercial, educational, leisure and entertainment, the concept is now being emulated in two other ParkCity’s development in Miri, Sarawak and Hanoi, Vietnam.

Desa ParkCity is highly accessible via several major highways such as the LDP Highway, the Middle Ring Road 2 and the Penchala Link. It takes only a short 15-minute drive to Mont’Kiara, 20 minutes to Damansara Heights and 25 minutes to the Petaling Jaya conurbation.

The developer was one of the first to introduce landed strata developments in the country.

Today, it is a highly sought-after address with well-thought landed homes and condominiums. The commercial sections, such as The Waterfront and Plaza Arkadia, provides residents with quality service at their doorstep. There is also a private hospital (ParkCity Medical Centre) and an international school (International School @ ParkCity), and residents can retreat to the clubhouse for community activities besides enjoying the large recreational space provided at The Central Park.

Desa ParkCity is deemed to be one of the country’s most liveable townships, where it is the first ‘community of short distances’ and the ‘most walkable’ community township in Kuala Lumpur. The entire township is based on its New Urbanism living concept, championing living sustainability within a park environment. Much thought has been put into the design of the common areas to provide connectivity, security and a sense of community.

Not only are the precincts in Desa ParkCity gated and guarded, residents are given the peace of mind knowing that the entire township is watched over by its own team of well-trained auxiliary police.

As most developments are freehold, Desa ParkCity remains popular among local owner-occupiers although in recent years, the township has become a choice for expatriates as well.

Staying true to its concept as a park city, the Desa ParkCity holds three major attractions besides residential neighbourhoods and commercial spaces. The Waterfront, the Central Park and The ParkCity Club offer a wholesome living experience for the community of this self-contained township.

The Waterfront is a 45-acre iconic retail entertainment centre of Desa ParkCity. This commercial area is one of ParkCity’s biggest price boosters, which comprises a supermarket and eateries.

The township is pet-friendly, with pet bazaars held occasionally and residents are welcomed to dine in selected pet-friendly F&B outlets at The Waterfront.

To promote a closer-to-nature lifestyle, the Central Park offers tree-lined paths for residents to enjoy. It also features a picturesque lake, children’s playground complete with childproof play equipment and a man-made stream for residents to relax and unwind beside. There is a nine-foot wide jogging path for residents who enjoy outdoor activities, surrounding the lake and inter-connected to all the neighbourhoods in Desa ParkCity.

One of the main facilities available is a FIFA-size soccer field and two floodlit basketball courts within its huge Desa ParkCity’s Sports Center.

The International School @ Desa ParkCity with its primary and secondary schools, as well as public schools in the area, provide high quality educational options for the community. A private healthcare facility, ParkCity Medical Centre, offers state-of-the-art full inpatient and outpatient medical surgical services, advanced diagnostics and 24-hour emergency services. This winning combination is perfect for those looking for a luxurious lifestyle surrounded with a complete range of amenities and facilities of international standards. 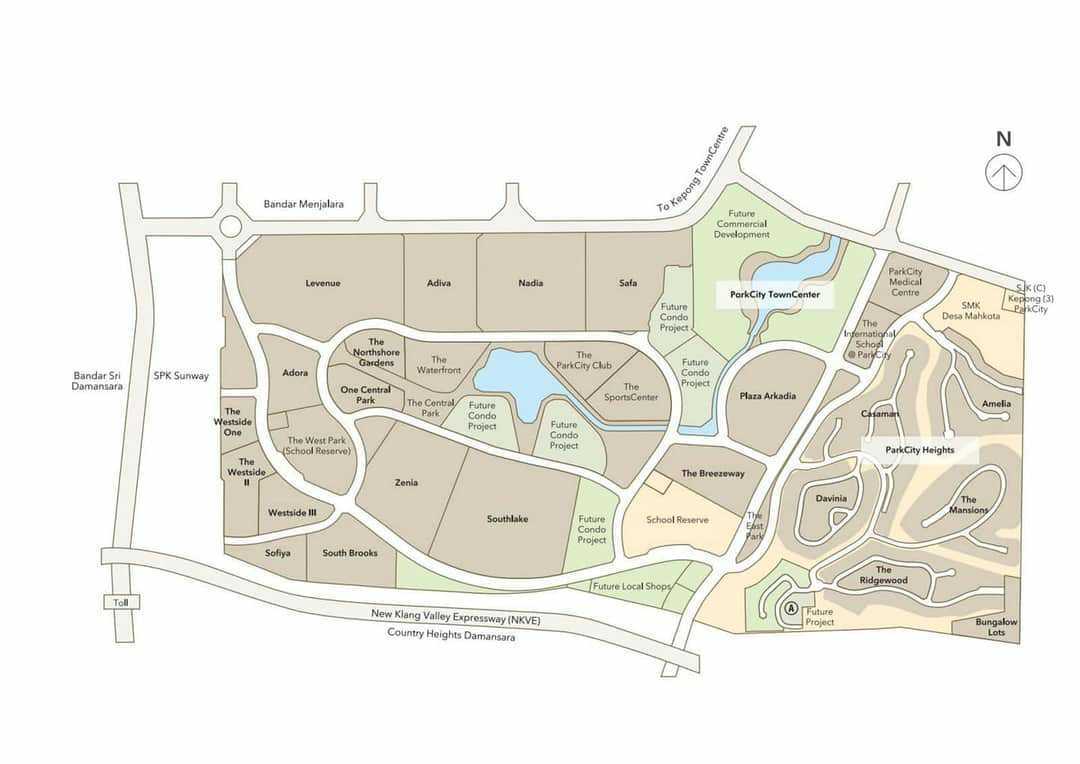 The masterplan of Desa Park City

Desa ParkCity is a desirable Kuala Lumpur address that has own numerous accolades. In addition to its sought-after properties, the freehold township draws a vibrant crowd because of it popular amenities, such as The Central Park - one of the most dog-friendly parks in the Klang Valley- and its two retail hubs, The Waterfront and Plaza Arkadia. It is also noteworthy that a good number of the F&B outlets are pet friendly.

Desa ParkCity was developed by ParkCity Group, which acquired the 473-acre tract in 1999. The project was launched in 2022.

Amenities in the self-contained townshop include an international school, a medical centre, a clubhouse, places of worship, recreational parks, a sports centre, offices and commerical hubs.

"The township is very condusive for young professionals and working families, with it multiple open spaces. The township is also well connected to various major highways and is near other established neighbourhoods."

The fact that Desa ParkCity is well planned bodes wll for its property market. Khong notes that its residential yield is noticeably more resilient than that of many other areas such as Mont'Kiara and KL city centre.

"This can be attributed to the low supply in the area of circa 4,000 units of condos compared with over 150,000 units in Mont'Kiara. Most owners [here] buy for their own stay and are owner-occupiers. Hence, the available units for lease are rather limited, attracting better returns," he says.

Khong notes that the average asking rents for high-residential properties with built-ups of 900 to 1,800 sq ft in Desa ParkCity range between RM2,500 and RM4,500 a month. He adds that rents vary as they depend on the property's size and furnishings.

"The average asking sale price is about RM925 psf. Therefore, the gross rental yield ranges between 3% and 4%," he says.

For the 2-storey landed residential properties, the average asking rents starts from as low as RM4,000 and go up to RM10,000 per month for units with built-ups ranging from 2,300 to 3,000 sq ft. Again, Khong notes that rents vary depending on the size and furnishings of the properties.

"The average asking price for [landed residential units in Desa ParkCity] is RM1,000 psf. Therefore, the rental yield ranges from 2.5% to 3%," he says.

Desa ParkCity is popular with locals as well as the expatriate community.

"The tenant profile here is largely local, but with the presence of the international school nearby as well as various other amenities, the [township's appeal] has attracted the expratriate community too," says Khong.

Desa ParkCIty residents are largely owner-occupiers, he observes, "In the earlier residentail phases, which comprise mostly landed residential units, more owner-occupiers were seen. Even though there have been more completions in the high-rise residential segment in recent years, owner-occupiers still make up a high proportion here compared with many other areas.

"[Desa ParkCity] has also emerged as a strong alternative to Mont'Kiara and attracted tenants who previously resided in Mont'Kiara," he adds.

According to Khong, high-rise condos in Desa ParkCity are generally more popular and preferred in the rental market due to their lower rates.

The Westside series is more affordable, and its rental market has been active. One Central Park and The Breezeway [high-rises] are both closer to The Central Park, hence their premium, and also because there are fewer units for rent," he says.

In terms of outlook, Khong is optimistic on the property market in Desa ParkCity. "The residential marker here is resilient given its unique selling point and development concept. It has also been rated as a sought-after location for residential living and has won multiple awards including the Fiabci World Prix d' Excellence Award 2019 and The Edge Malaysia Property Developent Excellence Award in 2015 for its masterplan.

"Desa ParkCity will continue to attract international tenants who want to make Malaysia their home as well as local tenants who are looking for a green and low-density environment," he concludes.