KUALA LUMPUR (April 7): KLCCP Stapled Group is currently in the midst of negotiating with a potential tenant to take up 40% of Menara Exxon-Mobil which is vacant. The group is targeting at completing the negotiation in the next two months.

Speaking at a press conference yesterday, the group’s chief executive officer, Datuk Hashim Wahir, said that the management has identified a single tenant in the IT industry servicing the oil and gas (O&G) players to take up the vacant office space in Menara Exxon-Mobil.

“We are working on this and we hope to get it done within the next one to two months,” Hashim said.

Exxon-Mobil has signed a long-term lease agreement with the group for Menara Exxon-Mobil but will only take about 60% as compared with the previous 100% after the lease expired at end-January this year. 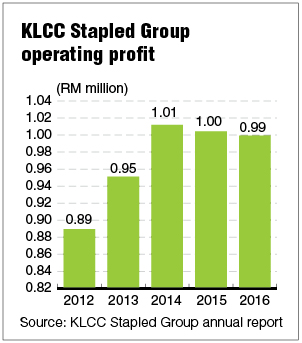 “It is known that we basically benefit from long-term tenancies in particular with Petronas for the Petronas Twin Towers and Menara 3 as well as Menara Dayabumi. This is the home for Petronas and the O&G. We will continue to ensure that our tenants are satisfied with our services and the state of our properties.

“That’s why our management services become very strategic in ensuring our tenants are retained,” Hashim said.

Besides that, the office segment also saw the completion of the conversion of the atrium spaces of level two to five of Menara Dayabumi, which provided additional office space of about 43,000 sq ft, which was added into the existing Triple Net Lease Agreement with Petronas.

At the back of locked-in long-term tenancies with high-quality tenants for its office segment, the management expects the office segment to remain stable. In its latest financial results ended Dec 31, 2016 (FY16), the office segment remained the major contributor to the group’s revenue with contribution of 44%.

The retail segment comprising Suria KLCC and the retail podium of Menara 3 Petronas is also expected to remain stable in FY17 after it retained its 35% contribution to KLCCP Stapled Group’s revenue.

“Our rental yield is reflected by the valuation that we have. In fact, there’s a slight increase in fair value at around 6.5% for last year,” he added.

Hashim, however, stressed that the management’s priority is not on the reversion rate but to focus on rebranding and finding the right mix of tenants to better reflect current shopping trends and pave the way for newer brands.

“We are now able to see that actually every year; we will have one-third of the tenants in Suria KLCC up for review. That would give us the opportunity to rebrand and that’s what we are doing right now. We are trying to reposition to the luxury men’s and women’s zones on level 1, on top of the ground floor, which is the traditional level,” he said.

When asked what could be the driver of growth for KLCCP Stapled Group in FY17, Hashim said that the management expects a stable performance across all segments.

As of closing, the group’s share price slipped by 0.13% to RM7.85, giving it a market capitalisation of RM14.2 billion. It is currently trading near its record-high level.

This article first appeared in The Edge Financial Daily, on April 7, 2017.

Curious how much you can borrow? Use LoanCheck to get your maximum loan eligibility from various banks, or LoanReport to get a FREE CTOS/CCRIS credit report.
KLCCP Stapled Group Menara Exxon-Mobil Datuk Hashim Wahir O&G Suria KLCC
SHARE
Facebook Twitter