E&O expected to launch few projects in next 18 months Maintain outperform with a target price (TP) of RM2: Eastern & Oriental Bhd’s (E&O) fourth quarter of financial year 2018 (4QFY18) net profit came in slightly lower than our and consensus expectations at RM37.9 million (-21.8% year-on-year [y-o-y], +72.4% quarter-on-quarter) due to slower-than-expected sale recognition of its 0.9-acre (0.36ha) land in Jalan Liew Weng Chee, off Jalan Yap Kwan Seng which is said to have been sold at RM55 million. In FY18, the group’s net profit of RM100.8 million only constituted 87% and 95% of our and consensus full-year estimates in the absence of the said land disposal.

The group’s FY18 revenue and pre-tax profit was at RM981.3 million (+39% y-o-y) and RM197.3 million (57% y-o-y) respectively driven by the sale of completed properties as well as the maiden revenue recognition from the sale of 20% of reclaimed land in Seri Tanjung Pinang Phase 2A project (STP2A) to Kumpulan Wang Persaraan (Diperbadankan) (KWAP). Separately, it is proposing a first and final dividend via distribution of treasury stock units on the basis of one stock unit for every 50 existing ordinary stock units held in the company for the financial year ended March 31 2018, which is equivalent to a three sen distribution per stock unit. We maintain “outperform” with an unchanged TP at RM2, pegged at 50% discount to RNAV.

With no new launches, the group’s unbilled sales, as expected, depleted further from RM499 million to RM481 million. The group is targeting to launch several new projects in the next 18 months which, among others, include 503 units of serviced apartments at the intersection of Jalan Conlay and Jalan Kia Peng — E&O’s second joint-venture project with the subsidiary of Japanese conglomerate Mitsui Fudosan—with an estimated gross development value (GDV) of RM880 million, The Peak residential development at Damansara Heights (GDV RM278 million) and the maiden launch of a condominium project at STP2 by first half of 2018 (1H18).

Reclamation is progressing well at 95% completion to date. With all the titles having been secured at the STP2A land, focus is now to get infrastructure work up to speed with one of the bridge contracts expected to be dished out soon. This is to facilitate material movements into the mammoth development with first launch that is Plot 14 expected by 1H19. — PublicInvest Research, May 28

This article first appeared in The Edge Financial Daily, on May 30, 2018. 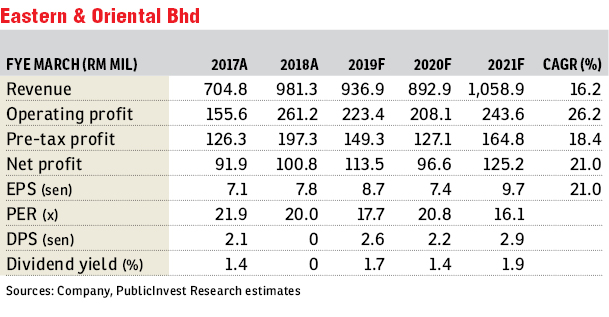 Looking for properties to buy or rent? With >150,000 exclusive listings, including undervalued properties, from vetted Pro Agents, you can now easily find the right property on Malaysia's leading property portal EdgeProp! You can also get free past transacted data and use our proprietary Edge Reference Price tool, to make an informed purchase.
Eastern & Oriental E&O Seri Tanjung Pinang STP2A KWAP
SHARE
Facebook Twitter