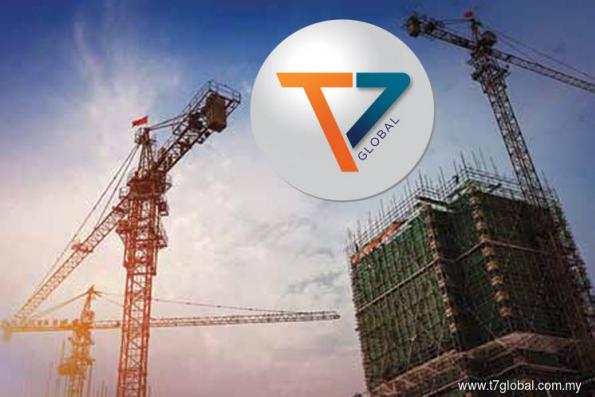 KUALA LUMPUR (June 28): T7 Global Bhd slumped as much as 15.2% yesterday after tycoon Tan Sri Vincent Tan Chee Yioun said he would be selling his shares in the company to avoid speculation linking him and the controversial East Coast Railway Link (ECRL) to any future decision by the Pakatan Harapan government to review the project or to award jobs.

At market close, the stock was down seven sen or 14.3% to 42.5 sen, with 12.20 million shares done at between 42 sen and 46 sen. The selldown followed on the heels of heavy trading in the counter on Monday when its share price skyrocketed to 56.5 sen from 42 sen as at the end of last week.

The sudden surge of interest in T7 came on the back of news reports — fuelled further by social media — speculating that the government could approve the controversial ECRL project because Tan had bought a 5.04% stake in the company. The speculation centred on his close association with Prime Minister Tun Dr Mahathir Mohamad, especially during the latter’s 22-year premiership from 1981 to 2003 when Tan successfully built his business empire.

Speculators had also zoomed in on Finance Minister Lim Guan Eng’s remarks at the weekend that the ECRL is one of the mega projects currently being negotiated. Dr Mahathir has indicated that Putrajaya is prepared to proceed with the project if the RM55 billion cost can be trimmed and the terms renegotiated with China Communications Construction Co Ltd, which was awarded the contract to build it by the previous Malaysian government.

Unsurprisingly, buying interest in T7 tapered off after Tan and T7 issued statements on Tuesday stating the Berjaya group head honcho was only a passive investor in the company, and that he had invested because of its well-positioned business in the oil and gas (O&G) services industry.

Tan also said he was not aware that T7 was one of the contractors for the ECRL project, and that reports appearing to imply a link between his stake in T7 Global and the Pakatan Harapan government’s decision not to cancel the ECRL project were “baseless allegations of impropriety”.

T7 said it understood the reason for Tan’s recent departure as an investor and said it would not have any impact on the group’s business or financial performance. “The group would like to reiterate that it is unaffected by the recent rumours and news, and is confident that its financial performance will continue to improve and grow through its core businesses in the O&G, aerospace, construction and infrastructure segments.”

It added that it welcomes the price renegotiation for the ECRL and aspires to participate in it. “As of today (yesterday), there has not been any contract awarded to T7 and we are still awaiting for the government’s review on the entire project,” said the company with a market capitalisation of about RM178 million.