Why buy during the HOC? Homeownership is no doubt one of the hottest topics in Malaysia currently especially when the inventory of residential property in the country is rising and has accumulated to an all-time high in recent years.

According to NAPIC (National Property Information Centre), as at the third quarter of 2018, Malaysia has as many as 43,211 unsold residential units inclusive of serviced apartments and small office home offices (SoHo) worth a total of RM29.47 billion. On the other hand, consumers have been lamenting that property prices are too high and are no longer affordable.

Hence, last November, Finance Minister Lim Guan Eng announced during the tabling of Budget 2019 that a Home Ownership Campaign (HOC) 2019 will be initiated in collaboration with the Real Estate and Housing Developers’ Association Malaysia (Rehda) and will run from Jan 1, 2019 to June 30, 2019.

In conjunction with the HOC, Rehda in partnership with the Housing and Local Government Ministry (KPKT) is organising a national-level expo from March 1 to 3 at the Kuala Lumpur Convention Centre. The launch of the HOC 2019 Expo @ KLCC will be officiated by Prime Minister Tun Dr Mahathir Mohamad. More than 50 property developers will be showcasing their products at the expo which will be followed by other expos at state level and major cities.

“The HOC 2019 Expo @ KLCC will see both the government and the private sector come together to market their residential units,” KPKT Minister Zuraida Kamaruddin tells EdgeProp.my in an email interview. 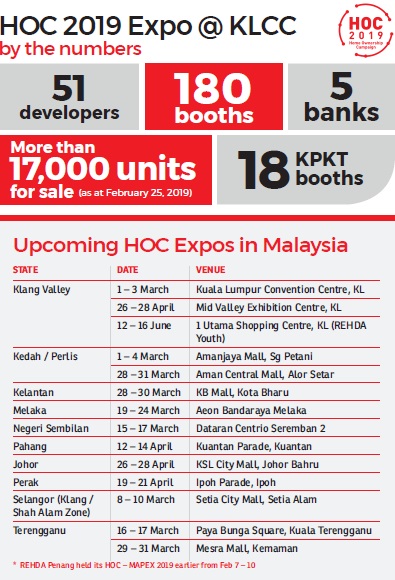 “For homebuyers, the HOC Expo is a place to gather information and advice about buying a home while having the chance to know more about the current offerings in the market,” she adds.

During the HOC period, Malaysian homebuyers will be exempted from stamp duties for the purchase of residential units registered under the HOC. Developers will also offer price discounts and attractive packages to purchasers.

For properties registered under this campaign, the stamp duties on instruments of transfer for properties priced up to RM1 million and for loan agreements of up to RM2.5 million will be waived.

On top of having the stamp duties waived, a homebuyer of a HOC property will also get at least a 10% discount off the list price.
Rehda will also be giving RM2,000 cash back to 50 lucky purchasers on a first-come-first-served basis subject to terms and conditions. Raising homeownership
As many would recall, the first national HOC was held in 1998 by Rehda. The intention then was to clear the overwhelming existing stock in the market particularly residential properties priced at RM250,000 and below.

Besides that, the six-month HOC 2019 is also longer than the previous one. It also provides more incentives to buyers such as stamp duty exemptions, notes Zuraida.

“Above all else, with HOC 2019, we hope more Malaysians would buy and own a home,” she says adding that the government is committed to help Malaysians own homes.

“At the same time, we also want the property industry to thrive and hence we are aiming for a win-win situation for all stakeholders,” she says.

So while Malaysians get to buy homes at a discount, developers get to clear the unsold units and ultimately move the market forward.
HOC 2019 Expo organising chairman Datuk N K Tong also tells EdgeProp.my that the main objective of the HOC is to increase homeownership in Malaysia.

“We need to reduce the number of unsold units in the country but having said that, it doesn’t mean that the situation (of unsold units) is so bad that we need a homeownership campaign to rescue us. The focus of the HOC is to have more people own homes,” says Tong.

He believes the timing is right to launch the HOC as it could help stimulate the market which has been in a prolonged slowdown in recent years.

“The market has stagnated for quite a while and I think it is the right time to give the market a boost so it can get back on track.

“If we leave the market at status quo, developers will not build new homes and the number of people per household will continue to go upwards. We need to understand that it doesn’t matter who builds them, we need more homes so prices will come down,” says Tong. Rehda made the proposal to the government to have the HOC and is glad that it is now a reality, thanks to the support of KPKT and the Finance Ministry. Under this partnership, Rehda will organise at least one expo in the major states of Malaysia.

Rehda has also been assigned to oversee the registration of the projects participating in the HOC and to ensure that the prices of products sold under the HOC are at least 10% discounted. This will be carried out by checking the prices against the approved selling prices stated in the respective participating projects’ advertising permits. Rehda will also certify the transaction compliance for the stamp duty waivers.

“The government recognises Rehda (to organise the HOC expos) because we have done this before as we regularly organise MAPEX (Rehda’s annual property exhibitions). For the government to set up a team to do it, it will be troublesome and incur unnecessary cost,” Tong explains.

Being the flagship expo of the campaign, HOC 2019 Expo @ KLCC will feature 180 booths which have been fully taken up by 51 property developers, five banks — Maybank (strategic financial partner), RHB Bank, Public Bank, Hong Leong Bank and Standard Chartered Bank; and by KPKT. More than 17,000 residential units with total value of RM11.8 billion will be exhibited and available for sale as at February 25, 2019.

“The HOC Expo @ KLCC is special because KPKT took up 18 booths to showcase all its affordable housing projects. Those are the projects developed by different government agencies such as Perbadanan PR1MA Malaysia, Syarikat Perumahan Negara Bhd, UDA Holdings and Permodalan Nasional Bhd.

“So, if you are looking for affordable housing, this expo is the place. You get all the choices under one roof to save you time from going from one sales gallery to another,” Tong shares.

Benefits of buying during the HOC

How to verify the 10% discount on a property?

This story first appeared in the EdgeProp.my pullout on March 1, 2019. You can access back issues here.