KUALA LUMPUR (Dec 10): The government is studying the feasibility of the reimplementation of the goods and services tax (GST) or other consumption tax models.

Deputy Finance Minister II Mohd Shahar Abdullah said the government will take into account various aspects, including weaknesses in the sales and service tax (SST) which is currently in force, as well as those of the GST which was implemented in 2015.

He said the study will include impacts on the economy, the cost of living, the impact of taxes on the price of goods as well as the ability to address shadow economy activities.

"The new tax should be easy to administer and not increase business costs, aside from strengthening the country's fiscal position," he said during the oral question-and-answer session at the Dewan Rakyat today.

Mohd Shahar said this in reply to a question by Wong Shu Qi (DAP-Kluang) on whether the Perikatan Nasional government would reimplement the GST or the wealth tax to boost government revenue.

"We will look at other methods as mentioned by the finance minister during the presentation of Budget 2021, by strengthening tax compliance and empowering the multi-agency task force.

“If we create a new tax, it will only boost revenue, but if it is going to be a burden on the people, it will not be effective,” he said.

Meanwhile, Mohd Shahar said in terms of the nation’s economic recovery, the government remains optimistic about a 5.5% to 6.5% gross domestic product (GDP) growth in 2021.

“The GDP contracted 17.1% in the second quarter of this year but improved to -2.7% in the third quarter, this is the impact from the implementation of the stimulus [packages]," he said.

“Together, we must ensure that the country's economic situation improves based on the passing of Budget 2021, because this is the fifth step before we launch the 12th Malaysia Plan (12MP) in January 2021," he added.

Looking for properties to buy or rent? With >150,000 exclusive listings, including undervalued properties, from vetted Pro Agents, you can now easily find the right property on Malaysia's leading property portal EdgeProp! You can also get free past transacted data and use our proprietary Edge Reference Price tool, to make an informed purchase.
GST Consumption Tax Cost of living
SHARE
Facebook Twitter 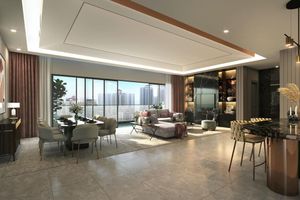