PUTRAJAYA (April 12): The minutes of a purported meeting between Datuk Seri Najib Razak and former SRC International Sdn Bhd managing director Nik Faisal Ariff Kamil, which was initially marked as ID (identification) but was later unilaterally changed by trial judge Justice Mohd Nazlan Mohd Ghazali as evidence, has become an issue in the former premier's appeal against his conviction.

A copy of the minutes was tabled to the board of directors on Sept 13, 2011, after the first RM2 billion Retirement Fund Inc (KWAP) loan, where the SRC board was told to follow Najib's instructions.

A copy of the minutes was produced by Tan Sri Ismee Ismail, who said he had retrieved the document from his car.

Najib's counsel Harvinderjit Singh said the document should not have been marked as P499 — here P denotes accepted evidence — based on Justice Nazlan's observation, when the original document had not been produced yet.

“The trial judge decided to accept the document as ‘P’ [evidence] on his own based on Najib's testimony in identifying his signature. This cannot be the move taken by the trial court as the admission of a document to be evidence should be based [on the fact that] it is recognised as an original document,” he said.

The prosecution, the lawyer said, had abandoned its case in classifying the document as evidence.

“The burden is on the prosecution to prove [the document is orginal] but they did not do so. It was not marked and never converted. This should have been considered as secondary evidence,” he said in highlighting the error made by Justice Nazlan.

Both Court of Appeal judges, Datuk Abdul Karim Abdul Jalil — who is leading the bench — and the third bench member Datuk Vazeer Alam Mydin Meera, then asked Harvinderjit what serious impact did the trial judge's change in the classification of the document have on the defence.

To this, Harvinderjit said the High Court is now making that document P499 significant to show that Najib was a shadow director, and that Nik Faisal was supposedly his link with the SRC board.

“That evidence should not have been accepted in the first place but the trial judge decided to admit it [as evidence] and this constitutes an injustice to our client,” he added.

The prosecution in the trial contended that since Najib has admitted his signature on the document when defence was called, then it should be admitted as evidence.

Harvinderjit further argued that Justice Nazlan also made an adverse inference based on the affidavit filed by his client in his defamation suit against former Transport Minister Tun Dr Ling Liong Sik, where in the affidavit he affirmed said he acknowledged the money came from SRC.

The trial judge, he said, ruled that the former premier already has knowledge in February 2016 that the money in his account came from SRC.

“With respect, we say the trial judge had failed to appreciate the context, when Najib made the statement. This follows on July 2 [2015], Sarawak Report had published transactions of the RM42 million from SRC to Gandingan Mentari Sdn Bhd to Ihsan Perdana Sdn Bhd to the former premier's accounts.

“Here Najib applied to strike out Dr Ling's defence and he admitted the deposit of RM42 million into his account but denied knowledge of the channelling the same. He has no knowledge that it was channelled through two intermediaries,” he said.

Harvinderjit said the fact that the suit was filed by Najib against Dr Ling for accusing him of misappropriating public funds shows that he is innocent.

The lawyer reiterated that the former premier had thought that the funds came from Saudi Arabia and that was on the back of his mind.

Since he has no knowledge or mens rea (criminal intention), then he should not have been called to enter his defence against the criminal breach of trust (CBT) charge, and be subsequently convicted, said the lawyer.

He further argued that since the three CBT charges — which were the predicate offences — should not stick, then the money laundering charges should also fall.

Meanwhile, defence lawyer Farhan Read submitted that the former premier had no pecuniary interests in SRC obtaining the said funds.

He added that the charge against Najib was that he had abused his power to give the RM4 billion loan by KWAP to allegedly obtain RM42 million, but the question was whether he should have declared his interests in the two Cabinet meetings when the government guarantees were made.

Farhan said the prosecution needs to prove that the former premier had conduct and control of SRC, to show that the former Umno president has pecuniary interests in this.

The defence contended that approving the two government guarantees issued in August 2011 and March 2012 for RM2 billion each, when Najib was present in the Cabinet meeting, does not amount to an abuse of power.

Farhan and lead counsel Tan Sri Muhammad Shafee Abdullah had also questioned the purported gratification of RM42 million as levelled in the charge, which he received three-and-a-half years after the approval was given for the government guarantee.

Justice Abdul Karim directed the defence to conclude its submissions tomorrow for the prosecution to give its reply. 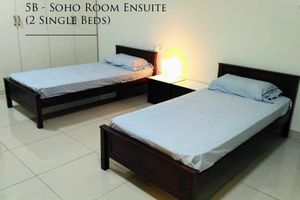