SHAH ALAM (April 13): The water pollution incident in Sungai Batang Benar due to a fire at a paint factory in Nilai 3, Negeri Sembilan yesterday afternoon has not affected water supply to consumers in Selangor.

“Odour sampling tests were carried out at three different locations in Sungai Pajam, Sungai Beranang and Sungai Semenyih, and the threshold odour number (TON) reading was recorded at zero,” he said, adding that the Negeri Sembilan water regulatory body had already been informed of the incident and an investigation was being conducted in the affected area.

Meanwhile, LUAS continued to monitor Sungai Pajam and conducted static monitoring and odour sampling tests until 8am today, which found the TON reading remaining at zero and that the river water flow was normal, he added.

Hee said LUAS had also taken preventive measures by placing 10 bags of activated carbon in Sungai Batang Benar to prevent odour pollution in raw water, adding that the immediate action taken to control the site had succeeded in preventing a stop-work order at the Sungai Semenyih LRA that would have caused water supply disruption.

Looking for properties to buy or rent? With >150,000 exclusive listings, including undervalued properties, from vetted Pro Agents, you can now easily find the right property on Malaysia's leading property portal EdgeProp! You can also get free past transacted data and use our proprietary Edge Reference Price tool, to make an informed purchase.
Selangor Water Supply Factory
SHARE
Facebook Twitter 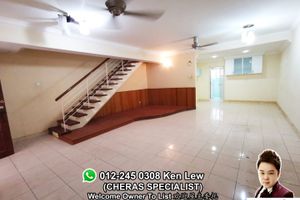