To ban or not to ban From being a nuisance to having a negative financial impact on hoteliers, short-term stays are not about to go away. The ultimate solution to the issues lies in clarity, governance and enforcement by the authorities.

The Penang state government stirred up a hornet’s nest recently by declaring that short-term rental homes or homestays in landed and high-rise properties would soon be banned.

Although no date was given, the decision sounded definitive. “Like it or not, we will be firm on this. Housing areas are for residents. If you are holidaying, go to a hotel,” Penang state executive councilor (exco) Jagdeep Singh Deo was quoted as saying on April 28.

Then, on May 5, Jagdeep’s fellow exco member Yeoh Soon Hin clarified that Penang was still open to the option of regulating short-term rental homes or homestays.

Yeoh was quick to add that many parties, including the Ministry of Tourism, Arts and Culture (Motac), the Ministry of Housing and Local Government and the local councils needed to be involved.

While Jagdeep pointed to the numerous complaints received from residents in high-rise homes and residential neighbourhoods, Yeoh highlighted that short-term rental homes or homestays had created unfair competition for tax-paying licensed hotels.

It is noteworthy that Yeoh said the ban would be imposed only on high-rise buildings with residential titles which, he said, prohibit owners from renting them out on a short-term basis.

Kampung-style homestays, which are allowed by Motac as a tourism product, would not be affected, he clarified.

On May 16, Jagdeep was reported as saying that he would pursue a ban on short-term rentals in Penang despite what some quarters might say about the move.

He added that while short-term rentals are illegal, the home-stay programme is approved by Motac together with the local councils. Hence, the latter could continue in Penang with no restrictions.

As this article went to print, Penang had yet to announce a decision on the fate of short-term rentals in the state.

Motac’s Malaysia Homestay Experience programme is not new. The ministry’s official website provides statistics through the years and a comprehensive directory (last updated on Dec  17, 2021) of homestays registered.

For the first three months of this year, programme participants hosted a total of 38,073 visitors, who spend RM2.1 million. Of the amount, Penang accounted for a small share of RM44,220 from 1,603 visitors, all domestic.

The programme may not have taken off in a big way but it has been gathering momentum, mostly from locals.

The potential of kampung homestays is immense as they are unique, both for Malaysian urbanites and foreigners. Surely Motac can do better!

Indeed, Yeoh’s concern for the hotel industry is understandable. According to the Malaysian Association of Hotels, the industry lost some RM9 billion in the first nine months of 2021, more than the RM6 billion for the whole of 2020.

Nevertheless, with borders opening up, the industry is recovering – provided no new crisis awaits. Look no further than the jam-packed hotels (and rising rates) and the massive interstate congestion during the recent extended holidays.

Short-term rentals and homestays have their costs and consequences, as well as bouquets and brickbats.

A discussion on whether a ban is the right way forward typically ends up with an emotionally charged “yea” or “nay”, depending on one’s personal interest and experience, good or bad.

Not all tourists choose short-term stays because of cost. The experience and convenience (what if you would never travel without pets?) can be very pleasing and convenient. It is about choice.

Whatever the case might be, the anguish an frustrations of those whose peace, tranquillity and convenience are shattered by irresponsible and inconsiderate short-term renters in their neighbourhood are very real.

Let us put ourselves in their shoes.

Then, there are property owners who defend the right to use their respective premises in whatever way they want. Forget about yields; some owners are probably finding it tough just to service their mortgage.

Still, owners should not expect to pass their woes to their neighbours. They must be responsible for those staying in their premises. Nonchalance or financial desperation are no excuses.

Central to the brouhaha is the lack of a clear definition of a short-term stay and the authorities’ enforcement of relevant laws and guidelines.

What is considered a short-term stay? A day? A week? Up to three months? Clarity is lacking.

As it now stands, residents in strata-titled properties can vote for or against any short-term stay as they define it, in an extraordinary general meeting. If adopted – an only if it is not in conflict with existing by-laws – the resolution will be lodge with the respective local authorities. Enforcement is key.

These properties may sit on commercial or residential-titled land, and this is something buyers must be aware of when considering safety and security issues as well as whether or not the building can be managed in a sustainable manner. In such projects, do not expect to know all your neighbours at all times.

On a related note, no commercial activities are permitted in a residential-titled property. Does this apply to traditional year-long rentals?

Working from home is now common practice. Are cooking, baking, sewing and craft-making activities for commercial reasons allowed in homes, then?

There is no quick and easy solution to issues surrounding short-term stays. It is easier said than done, but all stakeholders must come together to play their part.

Be that as it may, ultimately, the buck stops with the authorities.

The real deal: We need clarity. We need enforcement by the police and local authorities to maintain peace and order. No matter or complaint must be too trivial for their attention and response. Au Foong Yee (pictured) is editor emeritus at The Edge. She is also the chief judge of The Edge Malaysia Best Managed and Sustainable Property Awards, which examines, among other attributes, building safety and liveability. 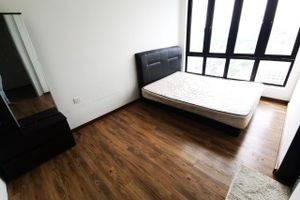