KUALA LUMPUR (Aug 30): Paramount Corporation Bhd said the second half of this year holds better prospects for its property sector as most of the economic uncertainty is expected to dissipate.

The group, which recorded a net profit of RM9.1 million for the second quarter ended June 30, 2022 (2QFY22), hopes its property launches worth RM1.1 billion planned for 2HFY22 will receive stronger demand as home buying sentiment is expected to recover.

Its group chief executive officer Jeffrey Chew Sun Teong said that although the lingering economic uncertainties due to higher interest rate and inflation have dented buyer sentiment in general, new property launches planned for the rest of the year extend the group a stronger earnings prospect.

“Our borrowings are not so significant, so the interest rate will not affect as significantly. But in terms of margin, we will have a bit of pressure, but nevertheless our profit margin is at a good level,” Chew said during a briefing on the group’s 1HFY22 results on Tuesday (Aug 30).

He added that labour shortage and building material cost continue to cause delays in project completion and delivery that made it difficult to fully recognise its earnings.

“It did affect us in terms of delivery. But we have always managed to have a buffer to ensure that we can complete projects on time. On that score, we are just deferring the recognition of revenue and sales because of the fact it was delayed. The labour shortage and material cost have increased prices,” said Chew.

To mitigate delay risk, Paramount employs measures such as value engineering by using alternative materials, and redesigning the materials to make it more efficient so that it lowers construction costs.

Chew said the group plans to launch three projects in 3QFY22, namely high-rise residences at Shah Alam, landed residences at Cyberjaya, and a transit oriented mixed development in Petaling Jaya. In 4QFY22, Paramount will launch a townhouse project in Sepang and a landed residential project at Sungai Petani.

Paramount’s unbilled sales currently stand at RM1.2 billion, which gives the company a positive cash flow in the future, he said.

The group currently has 494.8 acres of gross undeveloped land at a gross development value of RM6.67 billion.

In 1HFY22, Paramount’s property division achieved a revenue of RM361 million, which was 31% higher than that of the same period last year of RM274.8 million. The top three revenue contributors were Sejati Lakeside development and ATWATER development in Selangor, as well as Utropolis Batu Kawan development in Penang.

The group’s co-working division’s revenue for 1HFY22 was RM4.3 million, up 65% from RM2.6 million a year earlier. It was mainly attributed to higher contributions from the Tropicana Gardens outlet and Scalable Malaysia.

Paramount shares were unchanged at 69 sen in afternoon trading, valuing the group at RM429.1 million. 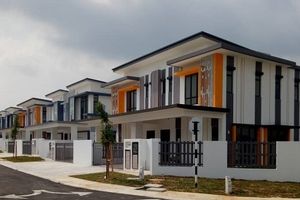