In a bourse filing on Tuesday (Nov 29), the industrial space solutions provider said revenue for the quarter rose 70% to RM147.47 million from RM86.33 million.

In a separate statement, AME group managing director Kelvin Lee Chai said that strong demand was recorded not only for its existing i-Parks, but also its newly-launched 169.8-acre (68.72-hectare) i-TechValley in October, fuelling the group’s optimism about future prospects.

“We are buoyant that our industrial parks will continue to perform well, backed by robust interest from Malaysian and overseas investors, comprising mid-scale to large companies across various sectors.

“With the sanguine outlook, we are currently sourcing for new land bank in central and southern regions [of Peninsular Malaysia] to replicate our success, with RM173.5 million of proceeds from the recent listing of AME REIT allocated for landbanking and expansion to capture more opportunities in the industrial park space,” he said.

Lee said the company is making great strides in its upcoming foothold in Penang, where it plans to build an integrated industrial park with a gross development value of RM1 billion.

“The overall business outlook is positive for AME, given the conducive investment climate,” he said. 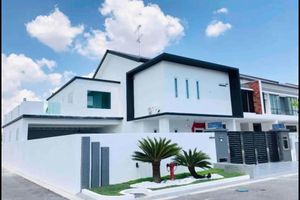