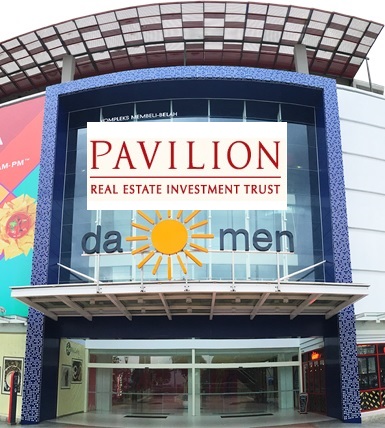 In a filing with the stock exchange this evening, Pavilion REIT said it recognised a 10.2% higher total gross revenue of RM129.45 million, from RM117.46 million in the previous corresponding quarter, mainly contributed by rental income from Pavilion Kuala Lumpur Mall’s tenants after the repositioning exercise.

It also saw an increase in its other income, mainly due to higher advertising income, fees received from Damen’s electricity provider to Pavilion REIT for collecting the electricity charges incurred by tenants in Damen Mall and increase in revenue rent in Pavilion KL Mall.

This was, again, mainly contributed by Pavilion KL Mall’s tenants after the repositioning exercise, increase in revenue rent, as well as the electricity collection fees from Damen Mall.

“Marketing will continue to create differentiation and key attractions to build shopping experience, and operating costs will be monitored to optimise efficiency,” it said in its filing.

At the closing bell today, the REIT declined four sen or 2.52% at RM1.55, after 787,800 shares crossed, giving it a market capitalisation of RM4.7 billion. — theedgemarkets.com

Looking for properties to buy or rent? With >150,000 exclusive listings, including undervalued properties, from vetted Pro Agents, you can now easily find the right property on Malaysia's leading property portal EdgeProp! You can also get free past transacted data and use our proprietary Edge Reference Price tool, to make an informed purchase.
Pavilion REIT Damen Mall Pavilion Tower Intermark Mall
SHARE
Facebook Twitter