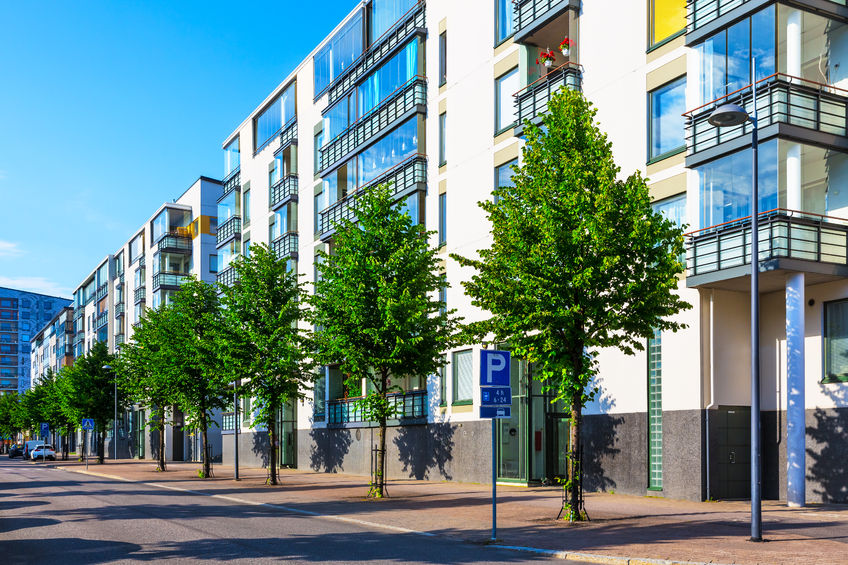 KUALA LUMPUR (October 1): The fact that most property developers’ unbilled sales — sales which are already locked in but not yet captured in the books — have been declining does not seem to come as a surprise to many analysts given the lack of catalysts moving the property sector.

However, they believe the decline in sales points to unexciting earnings prospects for developers as their visibility levels — gauged by dividing the level of unbilled sales over last year’s revenue — seem to be falling too.

Kenanga Investment Bank head of equities research Sarah Lim Fern Chieh said most developers are expected to see a flattish growth in sales and earnings moving forward, as there are no catalysts at the moment to drive the property market.

“Unbilled sales are a [function] of sales trends of the past, which have been on a declining trend because there has not been any major catalysts to drive property sales,” Lim told The Edge Financial Daily.

“The visibility of unbilled sales for developers under our coverage are at one or slightly below that, compared with an average of 1.3 to 1.5 years during the heyday of the property sector.”

“At best, developers should see flattish earnings growth going forward should they meet their sales targets set for this year. However if they miss their targets, they could see a decline in earnings in the following years,” she said. 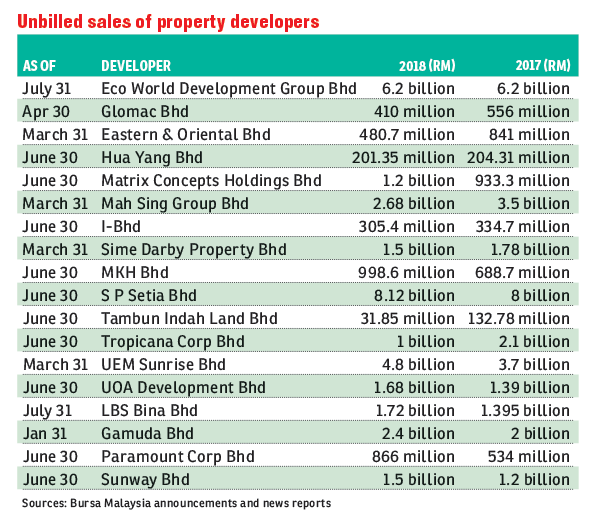 The outlook for the property sector is currently murky, said Lim, adding that the research house is still waiting for more clarity from the National Housing Policy that is expected to be unveiled soon, and the tabling of Budget 2019 on Nov 2.

She said another reason some developers had recorded declines in levels of unbilled sales is that they were concentrating their efforts on clearing unsold completed units, currently forming part of the inventory on their balance sheet. This resulted in less launches, which contributed to the slowdown in unbilled sales.

“We do note that developers have been focusing on clearing inventories, particularly those that are close to completion or have already been completed. Therefore, they have not been aggressively launching new developments

“Most developers tend to offer discounts when clearing their stock, and will double up their sales efforts in order to ensure that they are raking in the sales numbers, so this may be costly to the bottom line of developers and erode their profit margin,” she said.

On why developers would settle for lower margins from clearing their inventories, Lim said it is vital to realise cash flow from these inventories for future working capital purposes.

“In the heyday of the property sector, developers were launching projects with the confidence that they could achieve the [full] take-up rates, but some projects only end up achieving 70% to 80% take-up rates when the project is completed.

“As a rule of thumb, at a 70% take-up rate you can only recover your cost of capital. And every developer knows the longer they leave their inventory on the balance sheet, the harder it would be to offload, and they may have to write-down the values in the future.

“So they would rather take the margin hit [from discounts given], because at least they would be able to recoup their capital,” she said.

AffinHwang Capital property analyst Loong Chee Wei said sales numbers for most developers, at least up to the first half of the year, have been lower than their targets set at the beginning of the year.

“Unbilled sales show how sustainable the developers’ earnings are going forward based on locked-in sales, in a way that gives you comfort on earnings this year and maybe the next, but the leading indicator is usually sales,” Loong said.

“Sales would give you a leading indicator of how the prospects are going forward. Selectively some developers are still holding up well in terms of sales, but in a general a lot of them are seeing sales which are lower than their initial targets,” he said.

“However, you have to remember that it was an election year so in the first half of the year property sales were impacted by that, as people tend to hold back on purchasing big-ticket items like homes. And there was the surprise election outcome which led people to still hold back on purchases, in the sense that they wanted to see what the new government policy on housing is.

“At the end of the day, market sentiment is still weak in the property sector. It has picked up a bit post-elections but buyers still find it difficult to get financing and the crux of the matter is the affordability of homes” he added.

Hong Leong Investment Bank property analyst Lee Meng Horng concurred with the view that the declining level of unbilled sales is a reflection of weak market conditions for the past few years. Most developers were scaling back launches in 2015 and 2016.

“If a developer can generate [a] significant amount of new sales to replenish the unbilled sales or monetise its inventory, the historical unbilled sales is not a good reflection [for future earnings]

“Should a developer achieve good take-up rates for its project, say 70% to 80%, then there is little cash flow concerns at the end of the day, even though inventories may be high due to multiple or older projects.

“Besides, the level of inventories of developers should be read relative to [the strength of their] balance sheet. In other words, a developer with a stronger balance sheet can afford to hold on to some of these inventories without sacrificing their margins,” he said.

RHB Research property analyst Loong Kok Wen opined that the property sales will stay quite flat next year, given that economic growth is expected to slow down due to the axeing of some infrastructure jobs.

“It may not be a good time to buy property stocks as we won’t know when the market will recover. If investors buy property stocks now they may have to hold on for quite some time to see sizeable returns, or if they choose to trade some of these stocks the upside may be limited to maybe 15% or 20%.

“In order for investors to double their earnings, this may require a major upcycle in the property market. The last upcycle was from 2010 to 2013, with the peak being in 2013, before the property cooling measures took place in 2014,” she said.

Of the property stocks, she is positive on the prospects for Eastern & Oriental Bhd (E&O), Sunway Bhd and Paramount Corp Bhd.

“We like E&O largely because of the Penang angle, with the execution of the Penang Transport Master Plan now that the vision of the state and federal governments are more aligned. We like Sunway due to its diversified nature with businesses in trading, construction and property investment helping to offset any weakness in the property development sector. For Paramount, the catalysts would be the monetisation of its education division,” she said.

TA Securities chief investment officer Choo Swee Kee agrees with the notion that that this is a tough time for property developers, but believes that all is not lost for the sector.

“Statistically speaking, home ownership in Malaysia is still low and there should be good demand for residential properties. We also read that unsold property units are rising. So, it’s pretty obvious there is [an] unbalance in matching demand with supply on the right product. The industry needs to restructure itself to build what the consumer wants and can afford. This is a longer term story.

“Many developers have historical land bank that are carried at low costs. If they are willing to sacrifice some profit margins, they can still be viable developers. In terms of investment value, property developers’ share prices have corrected and many are trading below their real net tangible assets value. We believe that such good property developers represent a value buy for those with a longer-term view and are patient enough to wait for recovery,” he said.

This article first appeared in The Edge Financial Daily, on Oct 1, 2018.

Looking for properties to buy or rent? With >150,000 exclusive listings, including undervalued properties, from vetted Pro Agents, you can now easily find the right property on Malaysia's leading property portal EdgeProp! You can also get free past transacted data and use our proprietary Edge Reference Price tool, to make an informed purchase.
Malaysian Property Market
SHARE
Facebook Twitter