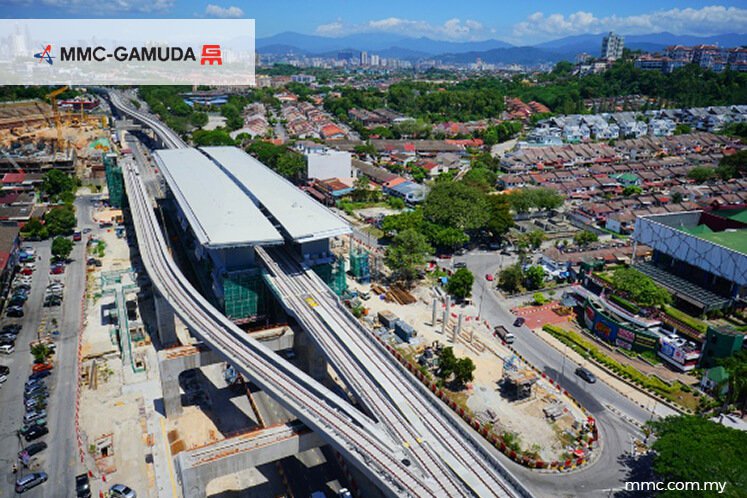 KUALA LUMPUR (Oct 30): The government’s decision last Friday to rescind Gamuda Bhd and MMC Corp Bhd’s contract termination  concerning the mass rapid transit Sungai Buloh-Serdang-Putrajaya line (MRT2) project did not offer a long-enough respite for both stocks. In fact, their tumultuous run is not quite near its end.

Yesterday, Gamuda and MMC announced to Bursa Malaysia that the consortium was served with a notice of intention by Emrail Sdn Bhd last Thursday, seeking to commence arbitration against it.

According to the consortium, the notice is premised on Emrail’s alleged dispute and differences arising from the conditions of contract dated Dec 23, 2010 for the construction, completion, testing, commissioning and maintenance of track works for the electrified double track project between Ipoh and Padang Besar.

Information on Emrail’s corporate website shows the MMC-Gamuda joint venture (JV) awarded it the track works subcontract for the project, dubbed the EDTP II project. The relevant dates, value, terms and other specific details of the contract are not known.

“MMC-Gamuda Joint Venture Sdn Bhd (MGJV) is seeking advice from MGJV’s solicitors, and where appropriate will take the necessary actions in relation to the notice,” Gamuda said in a Bursa filing yesterday, adding it will make the necessary announcement once there is a material development.

Gamuda shares got off to a good start yesterday morning, trading six sen higher than its last Friday’s close, but failed to sustain its upward momentum shortly after.

At market close, the stock slipped 12 sen or 4.86% at RM2.35, leaving it barely half of the value compared with its close of RM5.005 on the eve of the 14th general election on May 9. A total of 35.15 million shares changed hands, making the counter one of the top 10 active stocks yesterday.

MMC, too, has seen a pullback in its share price over the past months, down 21% from its close of RM1.39 on May 8. Some 1.35 million MMC shares crossed yesterday. The counter finished near its intraday low of RM1.10, down six sen or 5.17% from its last Friday’s close. The stock is now trading at its lowest levels since 2009.

Last Friday, the ministry of finance announced the JV between MMC and Gamuda, MMC-Gamuda KVMRT (T) Sdn Bhd, would remain as the contractor for the underground works portion of the MRT2 project.

The government’s decision to rescind its Oct 7 decision to terminate the contract came at the end of renegotiations between both sides last Monday, whereby the consortium agreed to a larger cost cut of 21.5% or RM3.6 billion, which is RM1.47 billion more than the reduction of RM2.13 billion that it had previously offered.

Now, the overall MRT2 construction cost has been cut to RM30.53 billion, some 22% lower than RM39.35 billion previously.

While the revised cost structure of the MRT2 project could result in a widening margin compression and therefore a marginal total earnings contribution, analysts believe Gamuda’s sacrifice of its profit margin is still preferable to a contract termination.

Affin Hwang Capital Research said by remaining as a turnkey contractor for the MRT2 project and settling the earlier disagreement with the new government amicably, Gamuda will retain its competitive advantage in future railway projects such as the MRT3.

MIDF Amanah Investment Bank Bhd Research wrote in a note yesterday that the project’s continuation is seen as a rational avenue for the group to manage the risk at hand. It raises the target price (TP) of the stock to RM2.89, from RM2.70 previously, with a maintained “buy” call.

This article first appeared in The Edge Financial Daily, on Oct 30, 2018.