Mudajaya back in the black after 13 straight quarterly losses This was despite its revenue contracting 25.6% on year to RM110.18 million during the quarter under review from RM148.18 million in 3QFY18, due to the completion of its 49 megawatt (mW) solar photovolatic energy plant at Sungai Siput, Perak in November 2018, and the slow progress of the Light Rail Transit Line 3 (LRT3) project.

Mudajaya in its exchange filing attributed its improved quarterly performance to the ongoing MRTv207 project and the recognition of remaining work done for its Pengerang projects in Johor.

It also said part of the reason for its profitability was due to no further equity accounting for the share of RKM Powergen Pvt Ltd’s  losses, its 26% associate company in India that undertook the construction of a power plant in Chhattisgarh State there.

“The group has equity accounted for RKM's losses up to its interest in RKM in its book in the preceding quarter, which has resulted in the net carrying amount of investment in RKM being adjusted to nil as at June 30, 2019.

“Hence, no further share of losses in RKM was recognised in the current quarter,” it added.

“The investment in the IPP in India via the group's 26% associate RKM continues to pose challenges to management even though all four units of the IPP development have achieved commercial operation status.

“There is some reprieve for the group's balance sheet resulting from the net carrying amount of RKM in the group's books having been fully adjusted to nil from prior share of losses; hence, there is no further equity accounting for RKM losses from this quarter onwards,” said Mudajaya.

The group said it is currently working on a proposed resolution plan with its lenders, and that the conditional share sale and purchase agreement it signed for the proposed 7.07% stake disposal is pending fulfilment of certain conditions precedent.

It said to date, RKM is supplying up to 350 MW power to several power distribution companies in the State of Uttar Pradesh and has also entered into a pilot agreement for the procurement of power with PTC India Ltd for the supply of 550 MW power from Units II and II for a period of three years.

“These contracts are expected to contribute positively to RKM's results upon the eventual commencement of power sales,” Mudajaya added.

As for its construction segment, Mudajaya said it is in good position to win new contracts given that the outlook for the sector is turning more positive with the revival of mega projects.

Mudajaya also plans to pursue investments both locally and overseas to build up its concession asset base with recurring income streams to cushion against the cyclical nature of the construction business.

“The group is keen to expand its footage in the renewable energy sector and will be participating in upcoming large scale solar farm projects,” it said.

Shares of Mudajaya closed one sen or 3.23% lower yesterday at 30 sen, for a market capitalisation of 176.96 million.

Looking for properties to buy or rent? With >150,000 exclusive listings, including undervalued properties, from vetted Pro Agents, you can now easily find the right property on Malaysia's leading property portal EdgeProp! You can also get free past transacted data and use our proprietary Edge Reference Price tool, to make an informed purchase.
Mudajaya Profit 3QFY19 Solar plant LRT3 MRTv207 Pengerang
SHARE
Facebook Twitter 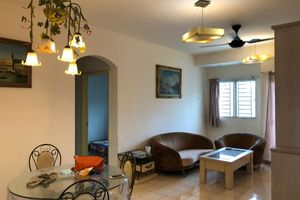