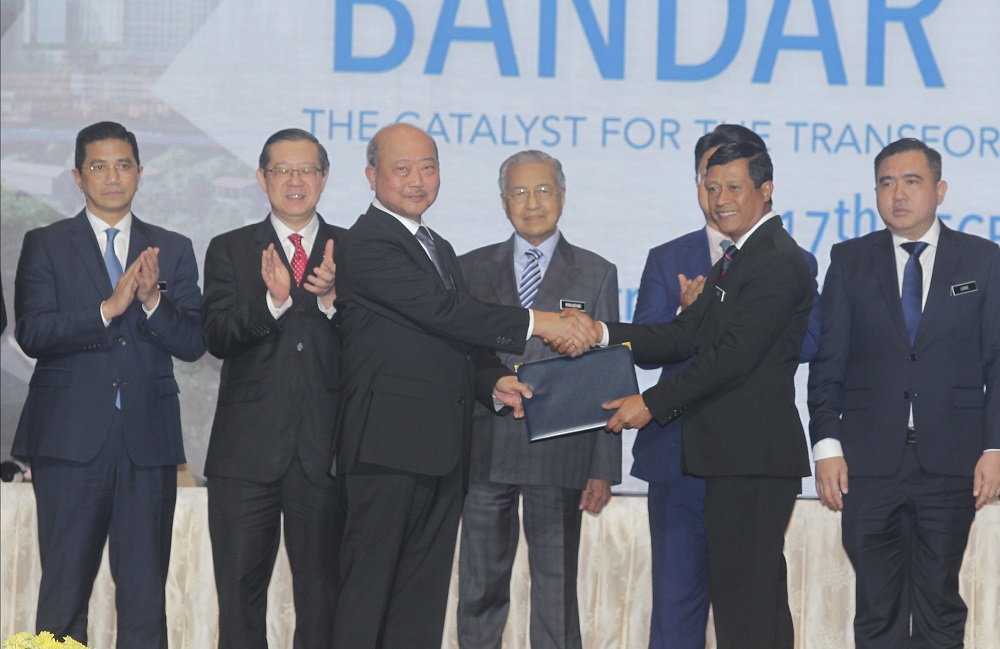 PUTRAJAYA (Dec 17): The construction of Bandar Malaysia is expected to kick start “very soon” after a deal has been inked between Putrajaya and the consortium formed by lskandar Waterfront Holdings Sdn Bhd (IWH) and China Railway Engineering Corporation (M) Sdn Bhd (CREC) today.

According to Prime Minister Tun Dr Mahathir Mohamad, who was present at the signing ceremony, the 486-acre project at Jalan Sungai Besi is expected to be developed over a period of more than 20 years and will shape the future direction of Kuala Lumpur.

“[The construction will start] very soon. I have told them [the master developer IWH CREC Sdn Bhd] to start immediately because I want to see it myself,” he quipped. “Twenty years more, I wouldn’t able to see it.”

He added that the government is also hoping to achieve a bumiputera participation of more than 30% in the supply of construction materials to the project.

Dr Mahathir was speaking to reporters at a media conference after the signing ceremony in the Putrajaya International Convention Centre.

Apart from that, Dr Mahathir reaffirmed that the government will go ahead with the High Speed Rail (HSR) project. However, the scale and cost of the HSR could be scaled down, he said.

“We will go ahead [with the HSR] but we have to find out what is the most suitable speed that we should have. It is not necessary for [the train] to be [operating at] 400 kph.

“We would like to spend less money. It is very expensive. Maybe we can scale down or do some adjustment in order to reduce the cost,” said Dr Mahathir.

He emphasised that the revival of Bandar Malaysia is testimony to both Malaysia and China working out a collaboration that will benefit the people of both countries.

“Like the ECRL (East Coast Rail Link), the Bandar Malaysia project is pursued in a larger context of forging and underlining long-term bilateral trade relation between China and Malaysia. It is being undertaken with a very clear objective that such a project provides premium economic value to the country,” he elaborated.

Nevertheless, the terms of the deal and contract details are to be finalised after further discussion between the stakeholders, before the construction can commence, noted Finance Minister Lim Guan Eng, who was also present at the event.

“All these [details] will be decided after further discussions. The framework and structure will be planned out as well and then they will be based accordingly,” he said.

Previously, MoF, IWH and CREC had a signing ceremony in June 2016 where a slew of incentives were announced by former premier Datuk Seri Najib Razak for IWH CREC Sdn Bhd.

These incentives include exemptions from real property gain tax, stamp duty and withholding tax for eight years, on top of income tax exemption for 10 years, and exemption from import duty on selected construction materials which are currently not being manufactured in Malaysia.