IPOH (July 23): Folks here were stunned when a helicopter touched down at Padang Ipoh to pick up three dozen packets of the famous nasi ganja for a customer from Kuala Lumpur, according to news reports today.

A spokesperson for the nasi ganja restaurant, who declined to be named, said he had received orders for 36 packets of rice with chicken, meat and salted eggs from a KL customer using a helicopter.

"I was a bit sceptical because there have never been customers who collected orders by helicopter but it turned out to be true.

"This is the first time orders were collected by customers using a helicopter. The price of each pack remained the same at RM10," the spokesperson told New Straits Times. Meanwhile, Perak police chief Datuk Mior Faridalathrash Wahid revealed that the Civilian Aviation Authority of Malaysia (CAAM) had only cleared the helicopter to land at the Sultan Azlan Shah Airport.

“It did not have permission to land at Padang Ipoh. We have relayed the information to CAAM Ipoh,” Mior Faridalathrash said. 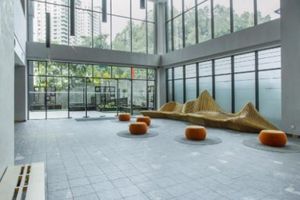