KUALA LUMPUR (June 16): The land acquisition for the Sungai Baru, Kampung Baru redevelopment project must continue as it has met the legal requirements under the Land Acquisition Act (APT) 1960 although some owners are against it.

Kampong Bharu Development Corporation (PKB) in a statement on Wednesday informed that if the land acquisition process is discontinued the government must be prepared to bear all the losses incurred by the developer and the owners involved.

According to the statement, the losses include RM50 million land acquisition deposit payment to the Director General of Lands and Mines (JKPTG), RM30 million for cost of providing transit and rental houses to residents until the replacement houses are completed, relocation costs for residents returning to their original homes as well as costs of repairing homes that have been abandoned for six years.

PKB said based on APT 1960 , no percentage of landowner consent is required before any land acquisition is implemented.

"However, in the Kampung Bharu redevelopment programme, the Ministry has stipulated that redevelopment can only be considered if the developer managed to obtain a threshold value of at least 50% of the property owners' consent to safeguard the interests and welfare of the residents involved," read the statement.

According to PKB, the land acquisition for the Sungai Baru redevelopment project was gazetted under Section 8 of APT 1960 on June 21, 2021 involving 37 terrace lots, 72 flat units and one Tenaga Nasional Berhad (TNB) electrical substation lot.

"At the same time, the developer also continued to hold engagement sessions with the 37 terrace house lot owners but have failed to get their cooperation," he said.

Meanwhile, Kampung Sungai Baru Property Owners Association chairman, Zulfakar Wahid requested that the second hearing on the land acquisition, which was postponed since December last year, be continued so that the over five-year wait to return to live in the heritage village would end soon.

Zulfakar said it was unfair to 'entertain' the voice of the minority who only represented 11% while the other 89% who had given their approval were required to wait longer to move into a new house.

“We, who have agreed have been living in the transit houses (at the Kerinchi Residence) for more than five years. It  is unfair for us to wait any longer just because the 37 unit owners do not agree,” he said.

Meanwhile, developer Ritzy Gloss Sdn Bhd director, Abdul Hadi Ahmad denied the allegation that the compensation offer was not competitive and the owners were not given the chance to negotiate.

"There is no issue of shortchanging the owners ... in fact, through land acquisition, they can only get 5% (compensation value), but the developer was generous enough to offer what they have agreed on," he said adding that all procedures were in accordance with the law. 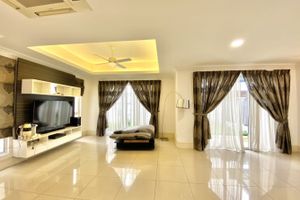