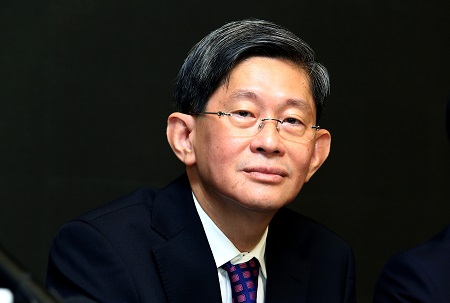 KUALA LUMPUR (June 28): The initial public offering (IPO) for Eco World International Bhd (EWI) has been set back by the approval process for the entry of a strategic partner, and is now expected to take place in September or October.

Originally targeted for July, EWI president and chief executive officer Datuk Teow Leong Seng (pictured) said the slight delay was due to EWI's need to obtain approval from Securities Commission Malaysia (SC) to enlist a co-anchor for the listing.

"Because of the entry of a big property group as a co-anchor, we have submitted all the documents to SC and we are waiting for SC's clearance," he said at a press conference today.

"It was initially planned to take place in July but the SC's process will take a few months so we expect to list in September or October," he added.

When pressed who the strategic partner is, Eco World Development Group Bhd (EcoWorld) chairman Tan Sri Liew Kee Sin said the partner is "an international player from Malaysia and is a Singaporean entity", and that the group could not reveal the identity of the player before obtaining SC's approval.

It was previously reported that tycoon Tan Sri Quek Leng Chan will be holding a major stake in EWI via one of his Guoco-related vehicles, alongside EcoWorld.

Liew will hold a 10% personal stake in EWI post-listing as its founding member.

It was reported that EWI's IPO will involve up to 2.15 billion new shares, of which 42.7% is earmarked for institutional and selected investors, 20% to 30% for EcoWorld, 10% for entitled shareholders of EcoWorld, 5% for directors and employees of EWI and EcoWorld, and 2% for the Malaysian public.

Teow said the IPO is expected to raise RM2.6 billion, a significant portion of which will be used to pare down EWI's debt.

Asked if it is a good time for EWI to head for listing in view of Brexit's impact on financial markets, Teow said: "There is never a right time for listing."

"Of course, the outcome was not what we expected, but going into the listing with RM2.6 billion to boot, it will give us the necessary firepower in London," he added.

He said the shock of Brexit would be momentary to financial markets.

He also said Brexit serves as an advantage to the group, as real estate prices in the United Kingdom (UK) is expected to fall by 10% due to the drop in the British pound sterling.

Teow said that according to a projection by a major bank, the British pound is expected to trade between 5.30 and 5.40 against the US dollar over the next two years.

"(Overseas) sales have been strong and continue to be strong, and as long as we keep our costs under control, we should be ok," he added.

"This is quite a credible number. We have been selling despite the Brexit debate," he said.

He also said profits from EWI's projects will only be recognised from 2018 onwards.

On increasing its land bank, Liew said the group has no plans at the moment to acquire land in Malaysia or the UK.

He said the group would only consider acquisitions in specific circumstances, such as land located beside existing projects that will benefit from the infrastructure that EcoWorld has built.

As for EcoWorld, Liew said the company has acquired two parcels of land measuring 374.5 acres in Batu Kawan, Penang, for a total of RM875.24 million, targeted for a township development.

He said the Employees Provident Fund (EPF) has expressed interest to jointly develop the project, along with EcoWorld's township and business park in Ijok as well as its township in Setia Alam.

"We cannot take risks with our choices of partners," he said.

"We have to pick the best partners and EPF has the financial strength to undertake projects with us.

"We want to expand but we also know the limitations of the market," he added.

He said as of May 31, 2016, EcoWorld has achieved RM1.32 billion worth of sales, which does not include sales from EWI and its slated Bukit Bintang City Centre to be launched in the second half of the financial year ending Oct 31, 2016 with two blocks of serviced apartments.

He also said the EcoWorld is confident of hitting its sales target of RM4 billion, despite a soft property market.

"Have you seen our queues? If you see our queues at our launches, then you will know why we are confident," he said. — theedgemarkets.com

Curious how much you can borrow? Use LoanCheck to get your maximum loan eligibility from various banks, or LoanReport to get a FREE CTOS/CCRIS credit report.
IPO Eco World International Teow Leong Seng EcoWorld Liew Kee Sin
SHARE
Facebook Twitter