THE new year started off on a positive note for Penang homebuyers, says Raine & Horne International Zaki + Partners director Michael Geh. Since the state government announced specific guidelines on Sept 13 last year to encourage the building of affordable houses, there has been “greater advocacy” and more approvals of such projects, Geh says in presenting The Edge/Raine & Horne International Zaki + Partners Penang Housing Property Monitor for 4Q2014.

The guidelines provide for three types of affordable homes: a RM200,000 unit with a built-up of 750 sq ft; RM300,000 unit of 850 sq ft; and RM400,000 house of 900 sq ft. A developer that wishes to build affordable houses will be exempted from the quota to build low or low medium cost units while development charges will be reduced to RM5 psf.

This bodes well for those looking to buy their first home in Penang, Geh says. From his research, he has found that Malaysia’s demographics is currently onion shaped, with the majority of the population within the 30-year-old range. This group, he notes, can only afford to pay for a house priced at about RM350,000.

“I have found that in the last five years, there has been immense pent-up demand for houses priced below RM350,000. This year is exciting because in the last two years, at every property exhibition, house buyers couldn’t  buy anything as the properties were priced out of their range,” he says. Sales activity for affordable housing, he adds, will grow exponentially this year.

More developers in Penang are listening to the market and offering affordable houses below RM400,000. Among them is MSummit Group, which launched Ramah Pavilion, an affordable apartment project in Teluk Kumbar, on Jan 31. Ballots for the units — with built-ups of 800 to 1,355 sq ft and priced from RM198,000 to RM398,000 — were held for eligible applicants who had registered with the state government.

It’s not only developers that have been provided plenty of incentives to jump on the bandwagon, landowners too are encouraged to develop affordable homes on their land, says Geh. As a result, moving forward, he believes the affordable house market will stay active.

Meanwhile, Geh highlights some hot spots for home owners to consider, among them, inner city George Town, within the Unesco Heritage Zone. Others include Bayan Lepas, including Bayan Baru, which is near the Penang International Airport, as well as Tanjung Tokong, which is within the vicinity of E&O Bhd’s Sri Tanjung Pinang development. On the mainland, Batu Kawan is popular thanks to its proximity to the Sultan Abdul Halim Muadzam Shah Bridge, or second Penang Bridge.

Market activity is mostly driven by domestic demand, says Geh. Moreover, many Penangites who are working abroad are buying homes in the state.

While the affordable housing sector is going strong, the same cannot be said for other property types. The Malaysian Insider had reported on Feb 12 that developers are feeling the pinch as state contributions have been increased. “[House] prices are still up due to rising costs faced by developers,” Real Estate Housing and Developers’ Association (Rehda) Penang chairman Datuk Jerry Chan had said in a press conference.

State infrastructure contributions have been raised of late. For instance, developers need to pay RM15 psf on the gross development area prior to development, while drainage contribution and conversion fee amounts have increased by 100% since 2013, Geh notes.

However, he believes that “the market should be allowed to work itself out as the Penang property market is undergoing many changes at the moment”.

Geh sees the positive outlook for the last quarter of 2014 following through to the new year. “I saw optimism in the market as affordable housing projects were approved [in 4Q] and this year, they will be sold. This is a marked difference from all other quarters of 2014, where there was negativity and hopelessness in the air as house prices were simply beyond homebuyers’ purchasing range.”

While areas surveyed in the monitor shows prices have risen from a year ago, Geh notes that they are plateauing now. He believes sales activities will slow, with a slight rise for premium houses priced above RM700,000.

In the rental market, flats and condomiuns saw no change in rental rates y-o-y and q-o-q. Other property types revealed varied results, with some areas showing marginal growth while other remained unchanged.

Geh says it is currently a tenants market as there is enough choice for renters to be selective. Furthermore, yields have dropped because market values have risen.

The Penang residential property market looks to get a boost thanks to the affordable house supply that will come onto the market in a few years. How this will change the property landscape is yet to be seen but for now, the pent-up housing demands of young Malaysians is finding an outlet. 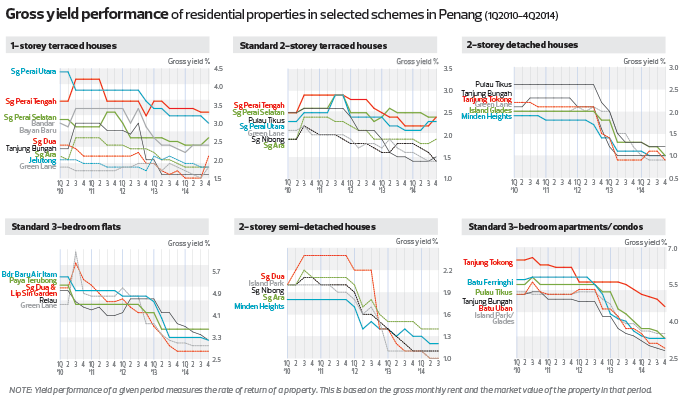