Residential transactions at 10 of Hong Kong’s biggest projects fell to 37 on Oct 31 to Nov 1 from 53 the previous weekend, and the average price dropped at four of the locations, Centaline, one of the city’s largest real estate agencies, said in a report dated Nov 1. The figures exclude new apartments.

“Sentiment among buyers is that the government will do more to damp property prices, so they are holding back,” Louis Chan, general manager of residential properties at Centaline, said by phone on Nov 2. Sales in October fell 11% from September to 694, the report said.

Hong Kong is seeking to rein in a 28% gain in home prices, sparking tensions with the developers. The government has raised down payments for luxury apartments, suspended mortgage insurance for rental properties and said it may intervene if the market becomes “unhealthy”.

Luxury home prices may fall 10% this month and mass-market housing values may drop as much as 5%, Chan said. Overall residential sales may drop 30%, he said.

The government hasn’t imposed concrete measures yet, they’re just holding meetings but they have warned the developers, but in the short term their efforts are effective,” Chan said.

Hong Kong financial secretary John Tsang told developers at a closed-door meeting on Oct 27 that the government doesn’t rule out intervening in the property market should it become “unfair”, a person familiar with the matter said.

Two days later, Tsang told legislators that he was “concerned” about “recent sales tactics and transacted prices” in the primary home market.

Henderson Land Development Co, controlled by Hong Kong billionaire Lee Shau-kee, said last month it sold a duplex apartment for what it claimed was an Asian record of HK$71,280 (RM31,524) per sq ft. Lee said at an Oct 29 briefing that the price was “100% real”.

The Centa-City Leading Index, a weekly measure of home prices including luxury properties, rose to 73.39 on Oct 25, from 73.37 the preceding week, Centaline said in an Oct 30 report. Excluding residences worth HK$10 million or more, it fell 0.3%, the most in six weeks, to 71.16. – Bloomberg LP 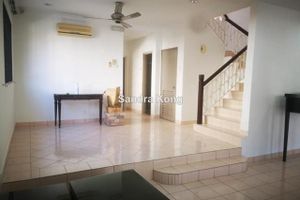