I miscommunicated, Tabung Haji chairman says of earlier denial on 1MDB land purchase
The Malaysian Insider May 07, 2015 | Updated 7 years ago 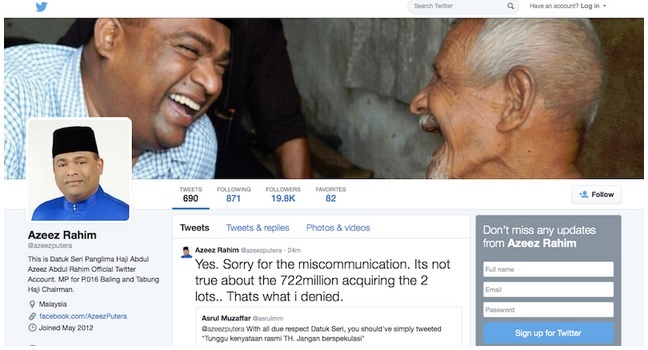 PETALING JAYA (May 7): Lembaga Tabung Haji chairman Datuk Seri Abdul Azeez Abdul Rahim has confirmed the fund's investment in one plot of land worth RM188.5 million and now says he had miscommunicated in his earlier denial about the land deal with debt-ridden 1Malaysia Development Bhd (1MDB).

"Yes. Sorry for the miscommunication. It's not true about the 722 million acquiring the 2 lots… That's what I denied," he tweeted today from his handle @azeezputera.

In another tweet, he said the pilgrim's fund had only made one investment and “at a lower price”.

"Not two units as written in the blog. That was what I was denying," he said.

Last night, Azeez had tweeted that the allegations made in a blog which leaked documents allegedly detailing the purchase of two plots of land were untrue.

"Not true. Tabung Haji will issue a statement on this matter soon," he had said, when asked about the matter by another Twitter user yesterday.

He also urged 1MDB to clarify the matter as soon as possible before it was "spun" further.

A blog called "The Benchmark" alleged that Tabung Haji purchased two plots of land at 1MDB's Tun Razak Exchange (TRX) project for a total of RM772 million in cash.

The alleged documents showed that the deal was expedited and agreed upon in April.

Azeez's latest tweet today clarifying his earlier denial comes after Tabung Haji CEO Datuk Johan Abdullah confirmed today the fund had invested in a piece of land with the plan of building a residential tower at the price of RM188.5 million.

Johan in a statement also denied that the pilgrims' fund had bought a second parcel of land from 1MDB at TRX as alleged.

"Leakages of proposal papers are not proof of approved investment decisions," Johan said in his statement.

He added that the RM188.5 million paid for the parcel of land in TRX was at a "discounted" price to current market value.

The anonymous blog had alleged that Tabung Haji made purchases of two plots of land using depositors' funds and bought the land at a far higher value than what 1MDB paid for it.

1MDB Real Estate Bhd obtained the land for the construction of (TRX) at RM64 per square foot from the federal government.