KUALA LUMPUR: The Iskandar Regional Development Authority (IRDA) is pondering the viability of a 500km Mass Rapid Transit (MRT) project in the sprawling development region which would provide a direct link to Johor Bahru.

IRDA's chief executive officer Ismail Ibrahim told the media at the Invest Malaysia 2011 conference that if all goes as planned, the MRT line would be built over six phases with the first phase to be completed by 2020 possibly linking up with Singapore's MRT system.

Ismail said the cost of the project has yet to be determined but estimates an average of RM30 million per km.

He also said that IRDA is looking to set up a Bus Rapid Transit System (BRT) which is attractive as it is much cheaper than MRT.

"That is why we are going for BRT first. We need to develop the BRT to secure the corridor until we are ready with the right number of riders. Because if you don't secure the BRT now, and later look to build the MRT, it will be costly.

He said the BRT will encompass about 400km with the first phase at about 40km covering Johor Bahru, Kulai and the densely populated areas.

"But it all depends on the government as they may decide to go straight into the MRT project," said Ismail, adding that Members of Authority (MOA), co-chaired by the prime minister and mentri besar of Johor, will have the final say. An MOA meeting has been scheduled for May.

In January this year, Malaysia Steel Works (KL) Bhd (Masteel) and KUB Malaysia Bhd (KUB) had proposed to build and operate a 100km inter-city rail transit system in Iskandar Malaysia which will connect to the MRT line from Singapore.

The companies had said the project could cost over RM1 billion and consists of up to 25 commuter stations in major towns in the Iskandar Malaysia region in the initial stage.

Masteel and KUB hold 60% and 40% equity stakes respectively in the JV company, Metropolitan Commuter Network Sdn Bhd, which is looking to build the Johor MRT. The initial plan is for the project to be undertaken in three phases and completed within 24 months from project commencement.

At the press conference, Ismail also said that investment in the region up until 1Q11 was at RM73 billion, surpassing IRDA's target of RM60 billion by end of 2011.

Asked to comment on the recent alleged malpractices in Iskandar Investment Bhd (IIB), Ismail said: "Of course, there are things that happen along the way, but this would not in any way hamper the progress that we are experiencing."

IIB recently made a police report on malpractices by some of its former senior management officers. 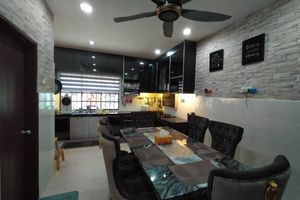