KUALA LUMPUR (May 29): The Kajang Municipal Council (MPKJ) will be coming down hard on land owners who allow illegal dumping activities on their property.

MPKJ president Mohd Sayuthi Bakar said that land owners must be responsible for their own property.

"The land owners must be aware of what's happening on their land.

"We will ask the Gombak District Land Office to issue notices to the land owners if we find that illegal dumping is taking place on their property.

"If they fail to address the issue then the land office can confiscate their property," he said during a MPKJ monthly full board meeting.

Sayuthi said they had identified eight hotspots that are being used as dump sites by unscrupulous people.

Sayuthi said this month alone, their enforcement unit had confiscated 34 lorries used to transport and dump construction debris and garbage at the illegal sites.

"We have been conducting regular enforcement but the problem still persists.

"This has given MPKJ a bad image. We will continue to go after those responsible," he said, adding that the lorry drivers were issued compounds of RM1,000 and an additional RM500 storage fees at their depot.

Sayuthi said that MPKJ was also looking into the mushrooming of illegal stalls in the municipality.

He said there was a group of people believed to be responsible for sourcing for sites around the township and renting out the area for a hefty profit.

"We believe this group is renting out the sites to individuals for between RM100 and RM1,000 depending on the size of the area. We will be taking action against the group," he said.

Sayuthi urged the illegal stall owners to demolish their stalls or MPKJ would do it for them and charge them for it.

He said that the council would soon be taking action against 80 illegal stalls in Taman Impian Ehsan.

Sayuthi added that there were plans to relocate licensed stall operators to a proper site.

"We are in the midst of looking for a site for the stall operators," he said.

MPKJ is also hosting a Kajang Satay Carnival from today to Sunday at the Kajang stadium.

The highlight of the event will be the creation of the longest satay line stretching 1,200 metres consisting of 50,000 sticks of grilled meat. 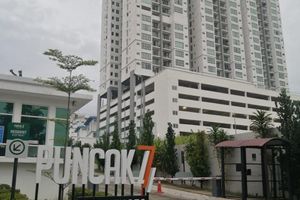