Mah Sing sees up to RM350m sales from Penang in FY15

Its chief operating officer Teh Heng Chong said the sales figure — representing 11% of the group’s overall sales target for FY15 — is expected to come from five development project — both recently launched, as well as upcoming ones like the Ferringhi Residence Two in Batu Ferringhi.

Speaking to reporters after the opening of its lifestyle show gallery on Level 11, Menara Boustead here, Teh said the group’s landbank now stands at 82 acres, with a gross development value (GDV) of RM2.8 billion and unbilled sales at RM300 million.

Despite the soft property market, Mah Sing is not stopping its launches in the state this year — only postponing some for a month or two, said Teh, citing the launch of Ferringhi Residence Two, which is awaiting approvals from the authorities, as example.

“Since we had a good take-up rate among foreigners for the first phase, we might promote phase two in Singapore, Taiwan, Indonesia, Hong Kong and China, because we have been doing well there.

“As for phase three (Ferringhi Residence 3), we anticipate the launch to be in the next two to three years,” said Teh, who represents the group’s high-end property sector.

He said the entire Ferringhi Residence development has a total GDV of RM826 million.

The Ferringhi Residence Two development consists of two blocks — one 32-storey and another 10-storey — and the group is contemplating launching the taller block with a target sales of RM100 million, he said.

He added that in view of the present market conditions, the group was practising caution and is only keen on embarking on strategic developments in the state.

“We are concentrated on strategic parts on the island — Southwest region where the second Penang Bridge is, city centre and Batu Ferringhi.

“On the mainland, we are always on the look-out for land. But so far, we have not found any that is suitable for us,” he said.

Noting that a larger portion of its landbank of undeveloped lands —61 acres — is located in Batu Ferringhi, Teh said development on these lands are expected to take place between the next five and eight years. 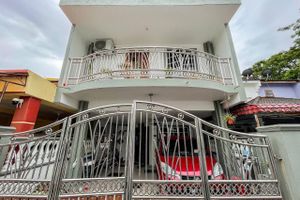