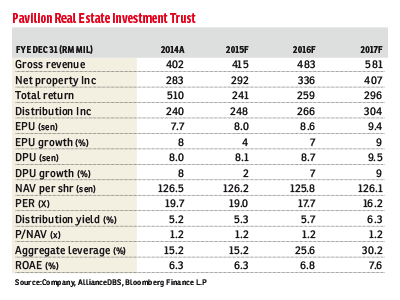 In our view, PavREIT is likely to continue its acquisition trail with the soon-to-be-completed Pavilion Extension, to which it has the right of first refusal (ROFR). We upgrade our recommendation to “buy” for PavREIT, following the distribution per unit (DPU) accretion from the proposed purchases, which elevates it among its M-REIT peers.

PavREIT’s core asset is backed by premium assets such as the 1.3 million sq ft net lettable area (NLA) Pavilion KL mall, located strategically in the heart of the Bukit Bintang shopping district in Kuala Lumpur. The premium profiling and location have led to strong average rental rates of above RM20 per sq ft (psf), as well as justifying a premium valuation over other large-cap M-REITs.

The two remaining ROFR assets are the 250,000-sq ft NLA Pavilion Extension and 300,000-sq ft Fahrenheit88 mall, currently held by major shareholders of PavREIT. Both could see valuations around or above the RM600 million to RM700 million range due to their prime location near Pavilion KL, which can support rental rates of more than RM20 psf per month.

We have imputed the Pavilion Extension acquisition in FY17, though we conservatively forecast a low initial DPU accretion of less than 1%.

Rolling forward our valuation base, we derived a TP of RM1.70, based on a dividend discount model with a 7.4% cost of equity. We revised our earnings estimate by 0.4%/1.0% in FY16/FY17 to impute the acquisition of Intermark Mall in FY16.

This article first appeared in The Edge Financial Daily, on January 11, 2016. Tap here to subscribe for your personal copy.

Looking for properties to buy or rent? With >150,000 exclusive listings, including undervalued properties, from vetted Pro Agents, you can now easily find the right property on Malaysia's leading property portal EdgeProp! You can also get free past transacted data and use our proprietary Edge Reference Price tool, to make an informed purchase.
Pavilion REIT
SHARE
Facebook Twitter 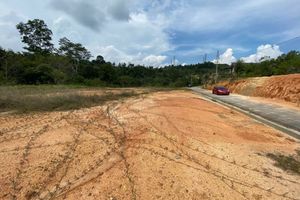