Newly appointed northern region general manager Ng Han Seong said at a press conference that the 426-unit two-tower project will have units priced between RM552,000 and RM800,000. The development is expected to be completed in 2019.

“The project has two towers — Tower A with 27 storeys and Tower B with 32 storeys. This is our final development in the Setia Vista development that began in 2008.”

The units comprise two- or three-bedrooms with bungalow and semi-detached layouts and designed as starter homes for young couples. The built-ups are 910 sq ft and 1,479 sq ft.

“While the first phase comprises 178 two-storey terraced homes, the [Setia Sky Vista], which sits on 6.15 acres (2.49ha) of land, will feature units with 11 layout plans. Earthworks began about three months ago,” Ng said.

He said the design of the layout is such that the entrance of each home does not face the opposite unit, while the bedrooms and living room are built in front with a view of the city or hill.

The unique feature of Setia Sky Vista is the 60m sky bridge connecting the towers.

“Setia Sky Vista’s twin towers are linked by a sky bridge on Level 18, connecting the towers’ viewing decks, and are enhanced by landscaped gardens,” he said.

Buyers will have two or three parking  bays each, depending on the cost of their units, Ng said.

Though S P Setia is continuously looking for land, it will concentrate on the island, where it presently owns 15 parcels of land of about 150 acres (60ha).

“Most of our land parcels are in the southern part of the island. We have land in Balik Pulau, Jelutong, Sungai Nibong and Tanjung Bungah,” Ng said.

He said the group would launch its 535-unit Wave project, part of the Setia Pearl Island condominium development, with prices ranging from RM300,000 to RM750,000, next year. 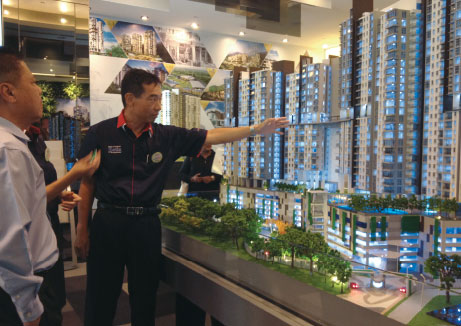