Tune Hotels to invest over RM1b in the UK

KUALA LUMPUR: Tune Hotels aims to have 25 hotels across the UK in the next five years, at an investment to the tune of more than £200 million (RM1.05 billion), revealed group chief executive officer Mark Lankester.

“When we first entered the UK in 2009 and 2010, we entered into a strategic partnership for London which would result in 10 to 15 hotels amounting to approximately £120 million to £150 million,” he said. “We’ve progressed that further with new partnerships that will result in a further 25 hotels equating to approximately £200 million worth of investments across the UK.”

“Newcastle is a vibrant city and full of eclectic people and places, perfect for Tune Hotel’s newest location,” Lankester said.

The five-floor hotel comprises 104 rooms and is situated in the city centre near the Quayside. The approximately

From £25 per night, visitors will enjoy five-star-quality hotel beds and 24-hour security. The building is 600 metres away from the Newcastle Central railway station and easily accessible to Newcastle University and St James Park. Room sizes range between 12 sq m and 15 sq m for double and twin rooms.

“As an entrepreneurial company, it is not about being the biggest ... we are an urban fun brand, ideally suited to city centres where guests want to get out and about to explore or need a central location, whether on business or leisure, that won’t break the bank,” Lankester said. “We will be targeting the major business cities across the UK such as London, Manchester, Birmingham and Leeds, as well as looking at key university cities where our concept has proved very popular.”

To date, there are also four Tune Hotels in London and one in Edinburgh, Scotland. Tune Hotels have earmarked another hotel in Canary Wharf, London.

“Canary Wharf is rapidly becoming the new financial centre of London and in line with that we’ve targeted the opening after the long Christmas and New Year break in January,” he said. 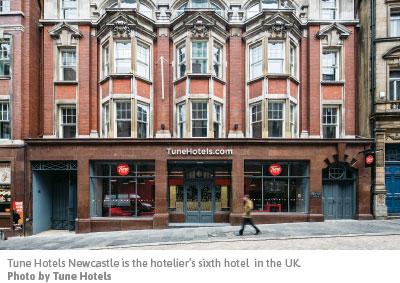