Maintain outperform with an unchanged target price of RM2.64: For the financial year ended Dec 31, 2016 (FY2016), Kerjaya Prospek Group Bhd secured RM1.5 billion worth of jobs in line with our RM1.6 billion target. Kerjaya’s property arm’s sole ongoing project — Vista Genting with gross development value (GDV) of RM300 million that was launched in early 2016 — has achieved a healthy 60% take-up rate. During the year, Kerjaya spent RM50 million to RM60 million on capital expenditure due to increased job wins (25% increase year-on-year compared with FY2015’s replenishment of RM1.2 billion). Moving forward, we are expecting capital expenditure to taper down to lower levels of about RM10 million as the bulk of the essential capital expenditure was completed in 2016.

Management targets to achieve RM800 million worth of jobs in 2017 on the back of its tender book of RM1.5 billion. As of the nine months ended Sept 30, 2016, Kerjaya’s outstanding order book stood at RM2.89 billion providing earnings visibility for the next three years. While our FY2017 replenishment target estimate of RM1.6 billion is double the management’s, we note that Kerjaya’s targeted key performance index tends to be overly conservative — citing its initial FY2016 replenishment target of RM600 million versus an achieved amount of RM1.5 billion. Besides, we note that Kerjaya is backed by Datuk Tee Eng Ho’s — Kerjaya chairman and majority shareholder of 75% — private property arm, which has a remaining GDV of RM1.6 billion of which we expect will contribute about RM400 million to RM500 million worth of jobs to Kerjaya for the next two to three years.

On the back of Kerjaya’s net cash position of RM110 million (as of third quarter of FY2016), we believe Kerjaya could be looking out for potential acquisitions of smaller private construction firms with specialised skill sets in piling and land reclamation in order to further expand its construction portfolio which is currently overly high-rise-centric. In addition, we believe management will be able to dish out a 30% dividend payout ratio for 2017 estimate — suggesting a dividend payout ratio of 6.7 sen, above FY2016 dividend payout ratio of 23% due to the lower expected capital expenditure in 2017 — providing stronger cash flow.

We continue to like Kerjaya for its conservative approach towards jobs selection — only taking up jobs with clients that are good paymasters and making sure jobs secured are within its working capacity. We believe this strategy allows a sustainable and robust growth for the bottom line in the long run. However, the risks to our call include lower-than-expected replenishment and margins and delays in construction works. — Kenanga Investment Bank, Jan 20 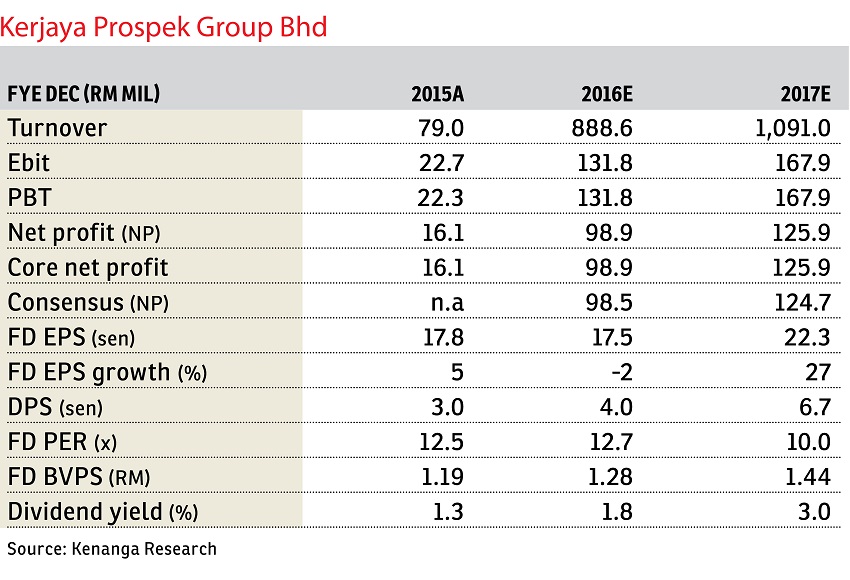