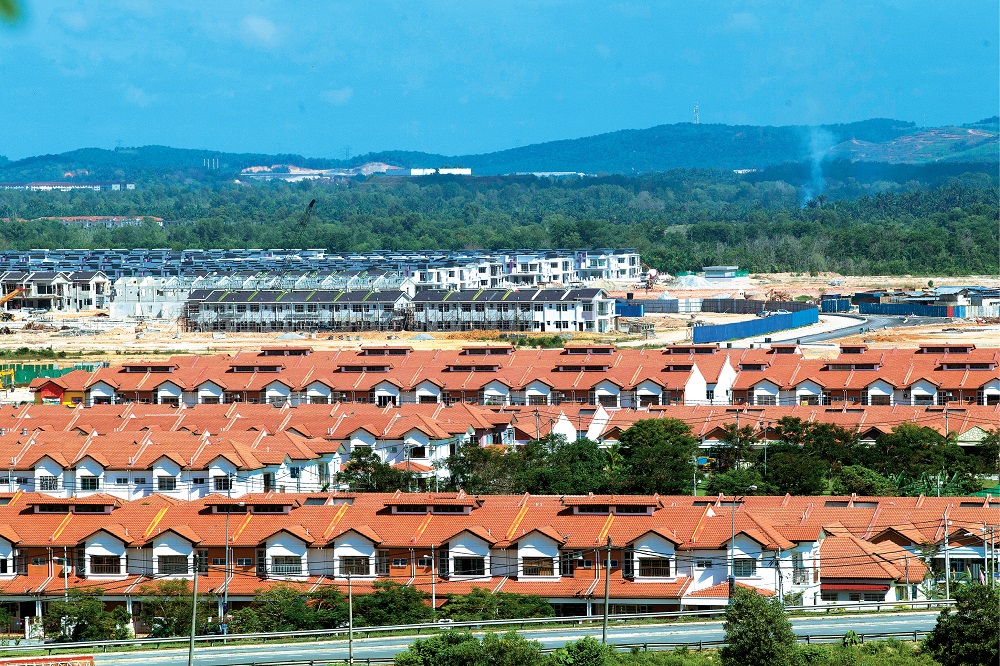 Growth is an interesting process to watch — a plant, a pet, a human or even a community. From a seed of little significance, maturation can spurt it into a whole and form it into a potent force.

In socio-economic progress, growth can push once-little-known areas to the forefront, and this is what is happening to places like Semenyih, Telok Panglima Garang and Puncak Alam. These necks of the wood are being thrust forward by the brimming peripheries of their neighbouring districts, which are low on land stock and high on cost. “The developers in Telok Panglima Garang are still largely focused on bread-and-butter products, namely terraced houses. The price trend depends on the product type, but most of these developers would try to sell at a benchmark of RM500,000 and below,” says Laurelcap Sdn Bhd executive director Stanley Toh.

Another area that has seen new development activity is Puncak Alam, which is located north of the Klang Valley, about 50km from Kuala Lumpur city centre. Properties there comprise mainly medium to low-cost housing property. However, this is changing.

“Puncak Alam is being transformed from an agriculture-based town to a more urban one as developers there are improving the access roads, infrastructure and amenities in the area,” says Wong.

Wong and Toh foresee bright futures for the areas mentioned above, as they will slowly mature with progressive developments.

“As populations gradually increase in these large townships, demand for properties will increase and prices will definitely rise, but the question is at what momentum? Perhaps not as fast as the previous bull run between 2008 and 2013, but rather a more gradual rise,” offers Toh. Interestingly, the current slowdown does not seem to have stopped developers from topping up their landbank for future developments. While others have been cautious, some developers have been busy acquiring land in seemingly untouched suburbs in the Klang Valley and Greater KL. Many of these areas border the current development hot spots as they are expected to receive some spillover from the development of their neighbours. These new areas could possibly emerge as the new development hot spots of the future.

So where are these places?

We may be more familiar with Cyberjaya than its neighbour Dengkil, but the area could benefit from the growth of the southern Klang Valley corridor.

In early 2017, PR1MA Corp bought 19.03 acres of land in Dengkil from Gabungan AQRS Bhd. At the same time, Mitrajaya Holdings Bhd announced its partnership with Gema Padu Sdn Bhd to develop two sites of more than 40 acres in Dengkil. In 2016, LBS Bina Group Bhd announced the development of a 638.2-acre integrated township in Dengkil.

“Klang Valley’s development is moving towards the south — therefore, the Dengkil and Sepang areas could be the next growth corridors.

Commenting on the performance of existing properties there, he says it is growing steadily.

“Based on our research of the secondary property market there, the average transacted price of double-storey intermediate terraced houses in Bandar Nusa Putra, Dengkil has increased slightly by 7% to RM590,000 in 2017 from RM550,000 last year.

“Meanwhile, the average transacted price of single-storey terraced houses in Bandar Pinggiran Cyber has appreciated by 9% from RM330,000 in 2015 to RM360,000 the following year,” says Wong. Located in Kuala Selangor, Ijok is a Chinese-dominated town with a number of Kampung Baru or New Village houses. However, in recent years, big property players such as LBS Bina and Eco World have launched township developments in the locality.

Wong says Ijok has attracted the developers due to its low land cost and its location within Greater Kuala Lumpur, about 50km to Kuala Lumpur city centre. There is also a new alternative access route in the form of the Kuala Lumpur-Kuala Selangor Expressway (LATAR). Properties there are still affordable, with housing demand expected to increase in the coming years.

Toh also views the LATAR Expressway as the catalyst to property development growth in Ijok.

“The LATAR Expressway and West Coast Expressway will be the main catalysts in this region, as they provide links to the northern and southern parts of Peninsular Malaysia,” he says.

The outlook for Ijok’s property market is positive, in the sense that there is still room for real estate values to increase. 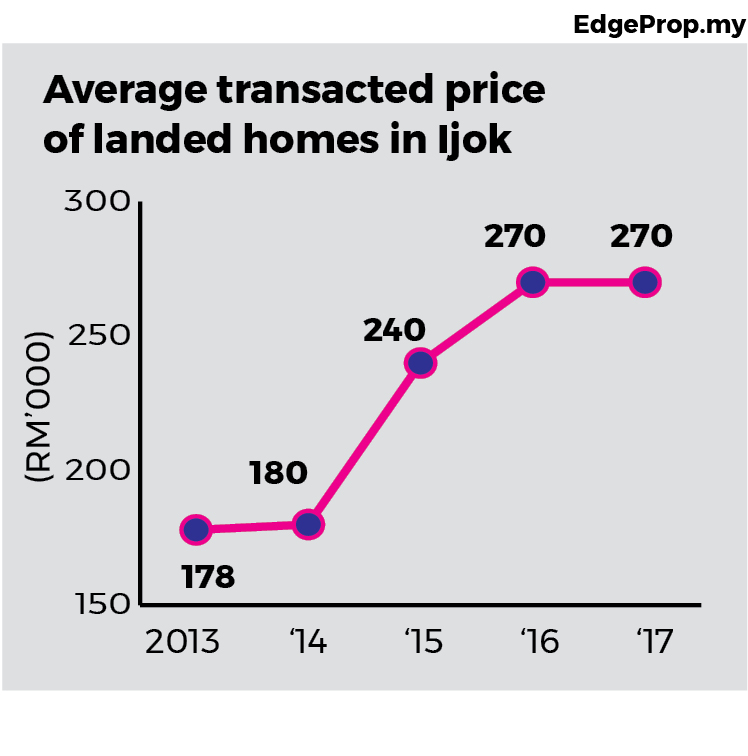 Hulu Langat is a region that spans Selangor’s Ampang, Cheras and Semenyih districts. The region south of the Klang Valley is getting more attention from property developers as the city is running out of development land. It grabbed more attention after a few major property players began developing Semenyih. Neighbouring areas to Semenyih such as Hulu Langat town near Ampang may enjoy some spillover from the development of Semenyih in the future.

“In the Hulu Langat region, prices of land have gone up substantially and have become expensive. This is largely due to the success of developments such as Setia EcoHill and Eco Majestic. The Kajang-Seremban Highway (LEKAS) has also opened access to these parts of the Klang Valley and contributed to the growth of the region,” Toh notes.

The transport infrastructure has further improved with the introduction of the MRT Sungai Buloh-Kajang Line.

VPC Alliance’s Wong believes that with improved connectivity and accessibility, the property prices in the region are expected to grow steadily.

“The most recent significant transaction of development land would be 245 acres in Semenyih, Off Jalan Broga by Jian Wei Development Sdn Bhd in 2016, reflecting a price of RM1,067,220 per acre,” Wong adds.

Hulu Langat landed houses have always been in demand and prices have been growing steadily. According to data collated by EdgeProp.my, the average price gained 33% to RM186,500 in 2017 from RM140,000 in 2013. 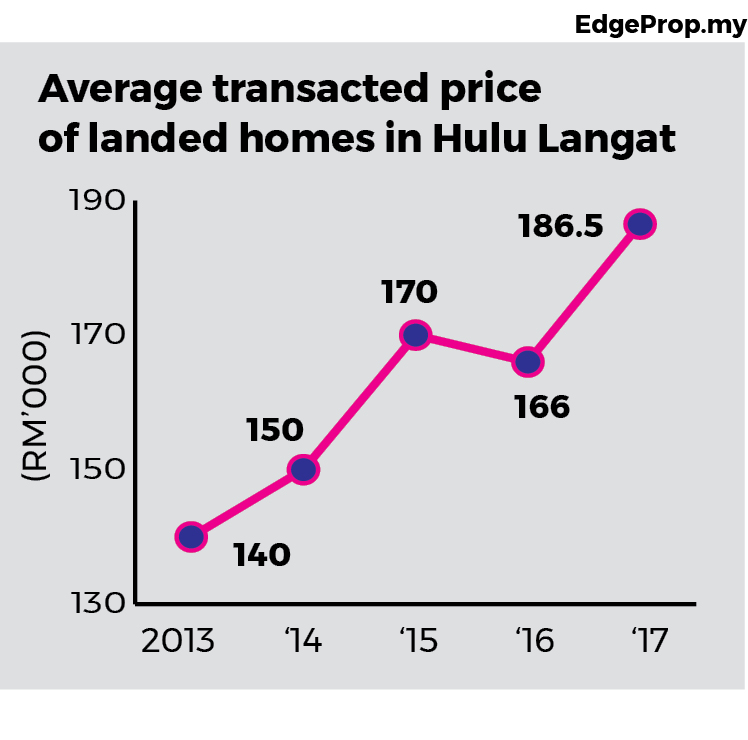 Located right next to Rawang in Selangor, Serendah may seem like another laid-back town right now but it is a matter of time before it awakens from its slumber.

Although Wong and Toh agree that Serendah is in a strategic location due to its close proximity to the booming Rawang, it is currently still underdeveloped. However, several developers own large tracts of land in this town.

TA Global Bhd has acquired 193 acres in Serendah while Land & General Bhd owns over 150 acres of land there.

“The price of land in Serendah has not moved up much as there has not been any interesting property development there so far.

“There is a huge industrial land purchased by Supermax in 2013 covering 40ha. There is also the joint venture between Country Garden and Mayland for a 167.57-acre development in Serendah, which has not commenced yet,” says Toh. Wong believes the property market in Serendah will pick up later. “It will need 10 to 20 years to see significant developments here. More developments will be expected in Rawang before they reach Serendah,” he says, adding that Serendah could be one of the property hot spots in the future, as it is only about 35km from Kuala Lumpur city centre.

He adds that the secondary property market has been encouraging, citing houses in Bukit Sentosa where the average price of double-storey intermediate terraced houses has increased by 38% from RM130,000 last year to RM180,000 this year.

Since then, the average price has grown steadily at an average annual increase of 9%. 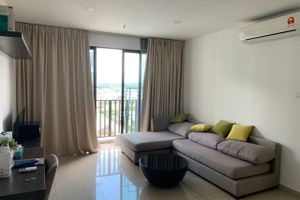 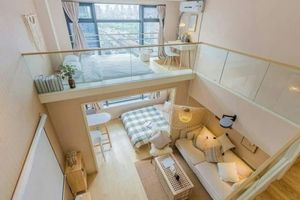