The highest-priced deals in town in 2017 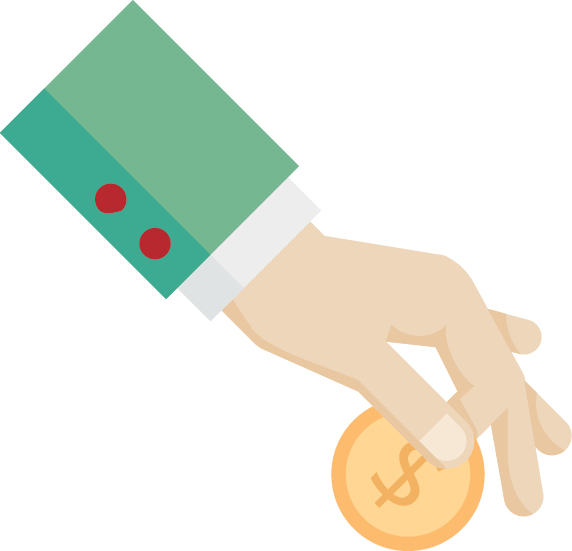 Slowdown or not, there are still multi-million ringgit deals to be made and last year saw its fair share of real estate transactions of above RM10 million each. From residential high-end bungalows to prime development lands, from office buildings to heritage shophouses and factory units, there was definitely something for every buyer with deep pockets.

Based on data from the National Property Information Centre (Napic), among the major deals in

Kuala Lumpur last year were the sale of the 33,505 sq m Wisma SDB in Jalan Ampang by Selangor Dredging Bhd for RM480 million; and a 29,977 sq m freehold commercial development plot along Jalan Raja Chulan that transacted for RM516.27 million.

Over in Selangor, a freehold 54,870 sq m commercial lot in Bandar Setia Alam transacted at RM147.6 million while Aeon Mahkota Cheras Shopping Centre with a built-up size of 34,242 sq m was sold for RM87.8 million. There were also significant development plots that changed hands including a freehold 75,737 sq m commercial land in Cyberjaya, which fetched RM128 million and a 264,400 sq m commercial tract located at Off Jalan Batu Arang in Rawang that sold for RM85.3 million.

Meanwhile in Penang, two development land deals in Bandar Cassia, Batu Kawan in Seberang Perai were among the biggest land deals in the state last year. The largest was a leasehold commercial  land of 1.2 million sq m that went for RM681.9 million while a smaller 301,455 sq m tract was transacted at RM143.2 million. Another significant deal was a 648ha freehold oil palm estate in North Seberang Perai, which transacted at RM589 million.

Here is a breakdown of some of the top deals by value that were concluded in 2017 in Kuala Lumpur, Selangor and Penang. 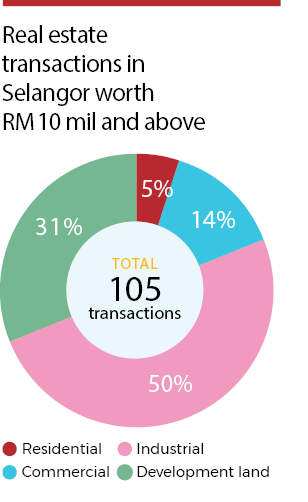 A total of 105 real estate deals of above RM10 million were transacted in Selangor in 2017.

There were 15 commercial real estate deals of above RM10 million. The top three were:

Also transacted was a petrol station located on a 10,546 sq m freehold plot at Jalan Lingkaran Tengah 2 that sold for RM25 million.

In the residential segment, there were only five transactions of above RM10 million and all five were residential lots. The highest-priced transaction was an 84,130 sq m tract in Puncak Alam that sold for RM40.7 million.

The industrial real estate segment saw 52 deals of above RM10 million each of which only 13 were vacant lots while the rest were factory units. The top three transactions by value in this segment were:

3 A leasehold detached factory unit in Seksyen 3, Kota Damansara that was sold for RM50 million.

A total of 33 development lands worth above RM10 million each were sold in Selangor last year. Among the deals, 23 of them were commercial tracts. The top three deals by value were:

3 A leasehold 32,280 sq m commercial tract in Taman Lestari Perdana which was transacted at RM63 million. A total of 44 real estate transactions of above RM10 million were concluded in KL in 2017. Of these, six were residential, 13 were commercial, one was industrial and the remaining 24 were development parcels.

In the residential segment, transacted prices ranged from RM11 million to RM20.6 million. The top three were:

1 A freehold three-storey detached house in the high-end Damansara Heights area with a land area of 1,816 sq m and built-up of 2,016 sq m. It was sold for RM20.6 million.

Out of the six over RM10 million deals, three of the residential properties are located in Damansara Heights. 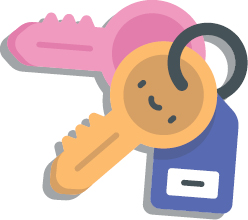 In the commercial real estate segment, transacted prices ranged from RM10.5 million to RM480 million. The top three were:

2 A 13,833 sq m freehold commercial plot on Jalan Tun Razak which was transacted at RM467 million.

Another notable commercial property deal was a freehold purpose built-office in Damansara Heights with a built-up of 8,762 sq m that was sold at RM65 million.

Also transacted was a retail unit in Taragon Puteri KL, with a built-up size of 1,235 sq m for RM12 million. 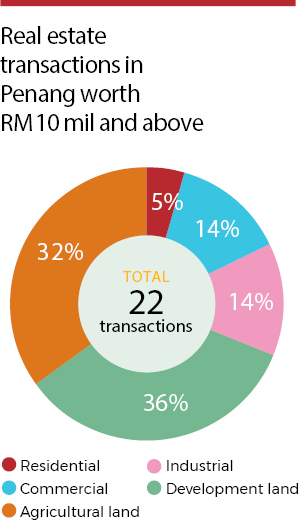 A total of 22 real estate deals of above RM10 million were concluded last year in Penang. Eight of them were development land transactions while seven were agricultural land deals. Commercial and industrial recorded three deals each; while the residential segment saw only one property sold at above RM10 million.

The residential segment recorded only one transaction of above RM10 million last year. It was a freehold 3½-storey terraced house in Bandar Seri Tanjung Pinang, which sold for RM12 million. It has a built-up of 1,151 sq m.

There were only three commercial property deals of above RM10 million. These were:

1 A 4½-storey shopoffice in Nova Place which was sold for RM15.2 million, making it Penang island’s largest commercial property transaction last year. This freehold unit is on a 828 sq m plot and has a built-up of 1,410 sq m.

2 A freehold pre-war double-storey terraced shophouse in Lebuh Chulia, George Town, which has a land area of 1,578 sq m, was transacted for RM14.8 million.

3 Another freehold double-storey pre-war shophouse which has a land area of 1,232 sq m, in Jalan Clove Hall, George Town, was sold for RM11.57 million.

In the industrial property segment, three deals were concluded at over RM10 million each. All three were detached factory units with a leasehold tenure of 60 years. They were:

There were seven agricultural land deals that were transacted at over RM10 million.

The deal with the highest value was a 648ha freehold oil palm estate in North Seberang Perai, which was sold for RM589 million.