The report looks at the shifts in capital flows and dives into the sources and destinations of cross-border investments in commercial real estate.

According to the report, this is the first time the region has overtaken Europe and North America as the top source of cross-border capital outflows since 2007.

“Asia Pacific was the largest exporter of capital in 2017 despite a significant slowdown from China due to government capital controls.

“The reduction in outbound Chinese capital was countered by significant increases in Singaporean, Japanese and, to a lesser extent, South Korean capital emigrating to the US and Europe.

“A major driver for the increase in outbound capital is the surge in the strength of the domestic markets in Asia-Pacific where the region saw a 36% increase in investment activity in the 12 months to March 2018, with the first quarter of this year setting an all-time record for transaction volumes,” said Knight Frank Asia-Pacific head of capital markets Neil Brookes.

Notably, Malaysia – which is number eight on the list of Asia-Pacific countries with the most cross-border capital outflows – is the only country on the top 10 list that has seen outflows drop, with investments abroad declining by 36% to US$500 million from US$700 million. 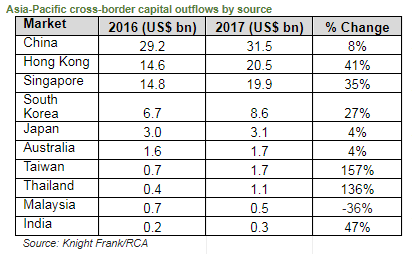 Meanwhile, Knight Frank Asia Pacific head of research Nicholas Holt commented that the increase of cross-border capital coming from the Asia Pacific region demonstrates the growing confidence and comfort of many different types of investors in this region looking for opportunities outside their own countries.

“While China remains the top capital exporter, Hong Kong and Singapore with 41% and 34% year-on-year growth in volumes in 2017 respectively, they were more active as limited local liquidity and diversification strategies encouraged investors to look overseas,” Holt noted.

As for inbound capital on a regional level, North America maintains its lead with the highest investment volume at US$14 billion (the US), followed by the UK (US$10.3 billion) and Germany (US$10.1 billion).

"... the coming years will see the reactivation of mandates from a number of regions with significant investment firepower such as the re-emergence of Japan as a major purchaser investor which could reinvigorate cross-border capital flows if even a small additional share of domestic investment found its way into overseas markets," said Knight Frank in a statement accompanying the report's release. 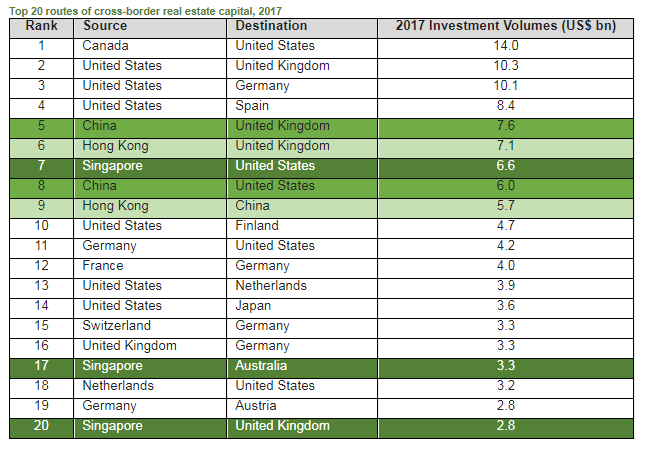 Brookes opined that Japanese investors will continue their outbound expansion in 2018.

“Last year, we started to see Japanese capital venturing overseas actively. Mori Trust, Japan’s real estate giant, purchased 10 St. James and 75 Arlington in Boston for a combined US$673 million; and most recently, the US$268.5 million sale of Tilt 49 in Seattle to a major Japanese fund – these two transactions were brokered by Newmark Knight Frank. Both of these Japanese buyers were new entrants to the growing market for overseas real estate investment opportunities,” Brookes added.

He added that fluctuations in currency have also hit some investors with currency hedging costs, causing them to seek resilient returns in the form of commercial real estate debt opportunities in the US.

For example, several Singaporean investors are now seeking investment opportunities in the US and Europe this year with Knight Frank, focusing on office assets, logistics, as well as specialist sectors such as student accommodation and data centres to diversify their income away from their core markets of China and Hong Kong.

“We expect outbound capital volumes from Asia Pacific to likely reach similar levels to those of last year in 2018, given the increasing drive for diversification, limited local liquidity and growing familiarity with offshore markets,” Holt concluded. 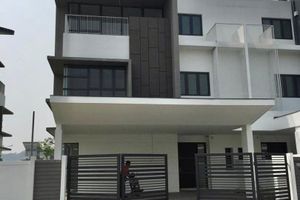