Each unit of Alstonia Garden Villas will have a land size of 24ft by 75ft and indicative selling price from RM1.8 million. The condos come in a choice of five layout designs, with built-ups ranging from 1,001 sq ft to 1,431 sq ft. The average selling price psf is RM630, Neoh told EdgeProp.my.

“We planned the project according to the natural contours of the sloping land. We designed an easy landscaped walkway from the main entrance leading up to the swimming pools and condominium. The pools will feature a stepping stream design,” she said.

Neoh explained that the key design concept of Alstonia is based on the “kampung” (village) resort feel. 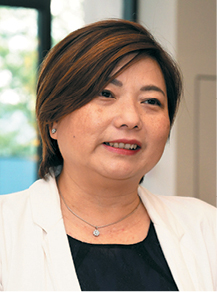 “The villas come with a backyard of at least 10ft long. Besides that, the noise and view from the facilities area will be screened off by thick shrubs and trees planted along the entire walkway,” she said.

Each linked villa will have a porch that can house two cars, while a basement carpark fitted with panic buttons is provided for condominium residents and visitors.

Although a soft launch of the project is planned for September, it is currently open for registration. The handover to buyers is expected by the third quarter of 2022.

According to Neoh, Alstonia is on one of three plots of land held by MRCB in Bukit Rahman Putra. Kalista Park Homes was launched in early 2016 on the first plot.

Bukit Rahman Putra is a matured area with many existing aged, but premium landed homes such as semidees and bungalows.

“Kalista is an upgraded version of the existing homes in the area, with better security, planning and design. The homes have individual titles, but are designed as a gated-and-guarded community,” Chong said.

“After Alstonia (on the second plot of land), we will be launching the development on the 4.55 acres of the third plot of land, just next to Alstonia by end next year,” Neoh reveals.

An integrated commercial development is planned, akin to Solaris Dutamas in Kuala Lumpur which features the Publika Shopping Centre.

“We are still getting approval and that will easily take another nine months. It will comprise shop units, retail podium and one block of serviced apartments,” Neoh said.

“It is poised to be the new commercial hub of Bukit Rahman Putra. As we have done in our previous developments, MRCB will own and manage all the commercial units so we can control the tenant mix and make sure it caters to local needs,” said Neoh.