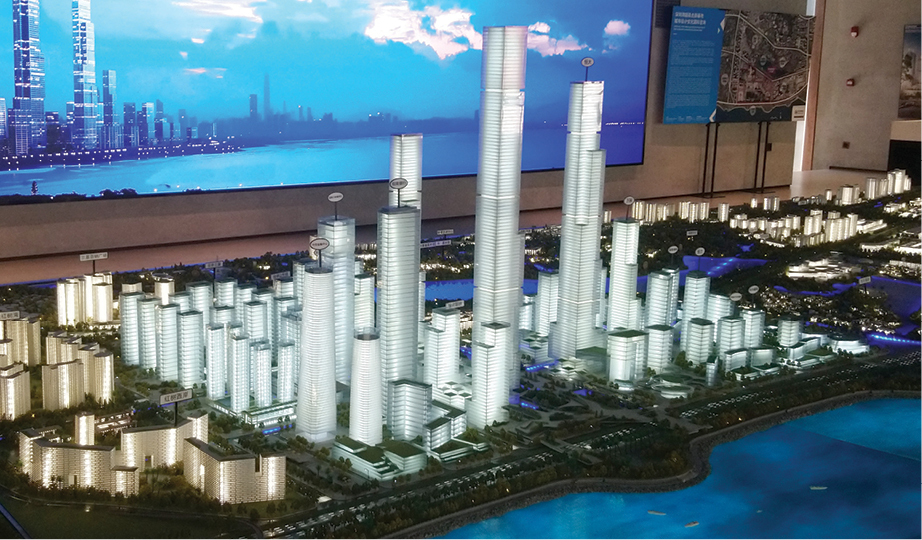 Taking a stroll on the southern coast of Shenzhen city, China, you can’t miss the Hong Kong skyline across the ocean, especially when the sun goes down and the island lights up.

However, in five to seven years, those in Hong Kong who are looking towards Shenzhen Bay will also get to appreciate a new landscape on the horizon upon the completion of the Shenzhen Bay Super Headquarters Base.

The mega project is one of six identified “Urban Living Room” projects undertaken by the Shenzhen Municipal Government to transform the city into a green and smart city for the future.

The parcel of land adjoins Shenzhen Bay in the south, the inner lake wetlands of the Overseas Chinese Town (OCT) in the north, the Sand River golf course in the west and the OCT Harbour in the east.

It is a prime site strategically located across the sea from Asia’s financial hub Hong Kong, that the government has held for 13 years to carefully plan and position the Super Headquarters Base development.

The area will soon be transformed into a high value integrated urban development that will showcase its unique natural landscape and be an urban gateway to the city in the future.

Shenzhen Bay Super Headquarters Base will be the only development that will be connected to three major highways in Shenzhen and three MRT lines including an airport express line which will take 20 minutes to reach Hong Kong and about 40 minutes to the Hong Kong international airport.

Only Fortune Global 500 and China’s top 200 companies were invited to tender for lands to be developed into their offices for self-occupation.

Vanke is building and will be moving into its 300m-tall office headquarters in Shenzhen Bay Super Headquarters Base in the near future.

Vanke is also developing a unique integrated development called ZhenWanHui on the only plot at Shenzhen Bay Super Headquarters Base that is allowed to be developed commercially for sale.

ZhenWanHui is a joint venture development between Vanke and state-owned railway company Shenzhen Metro Group. Sitting on a 16.8-acre (68,000 sq m) plot, it will have a total built-up area of 470,000 sq m upon completion in 2021. 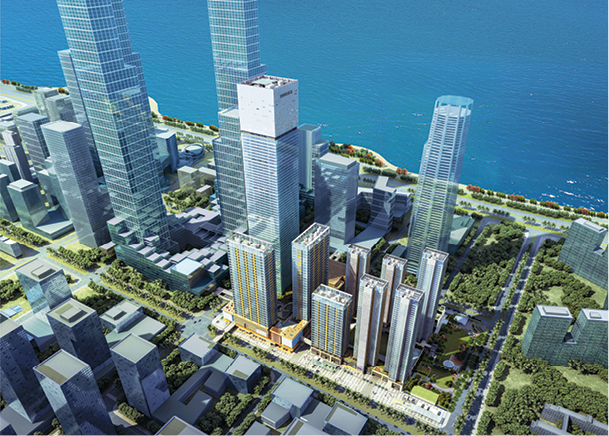 There are 342 serviced apartment units spread over five towers with built-up sizes ranging from 2,798 sq ft to 3,336 sq ft. The serviced apartments have all been sold as of October 2019. Selling prices were from RMB30 million to RMB60 million.

There is also one block of loft offices with unit built-up sizes ranging from 796 sq ft to 947 sq ft. They were opened for sale last year and have been fully sold by May this year. They were selling at RMB7.5 million to RMB15 million per unit.

There are three office towers altogether. One is being sold en bloc while the other two offer office spaces that have been fully sold.

A spokesperson, speaking to Malaysian media who were visiting the project during a Vanke familiarisation trip recently, said the Grade A 80-floor office tower being sold en-bloc is tagged at RMB15 billion to RMB20 billion.

Besides the skyscraper, the duplex commercial lots which opened for sale recently have also been sold out with a starting price of RMB53 million. Each unit will have an average built-up of 2,690 sq ft.

Meanwhile, the 6-floor shopping mall will have a built-up area of close to 1 million sq ft.

This story first appeared in the EdgeProp.my pullout on Nov 15, 2019. You can access back issues here.

Looking for properties to buy or rent? With >150,000 exclusive listings, including undervalued properties, from vetted Pro Agents, you can now easily find the right property on Malaysia's leading property portal EdgeProp! You can also get free past transacted data and use our proprietary Edge Reference Price tool, to make an informed purchase.
Shenzhen China Hong Kong Shenzhen Bay Super Headquarters Base Evergrande
SHARE
Facebook Twitter