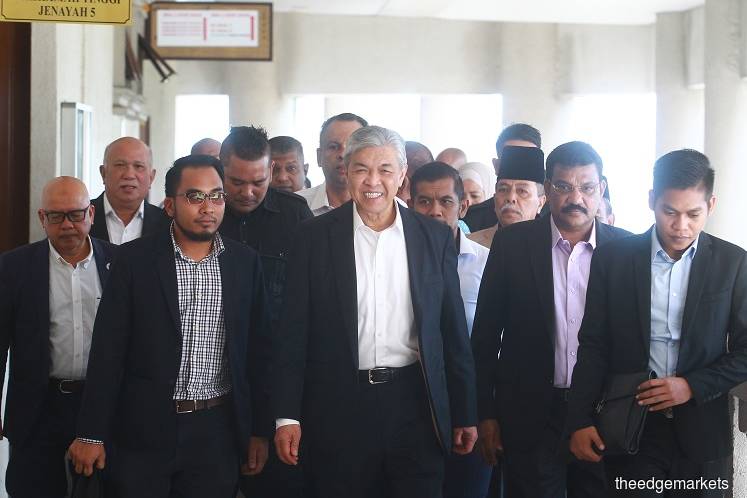 KUALA LUMPUR (March 3): Umno president Datuk Seri Dr Ahmad Zahid Hamidi escaped contempt proceedings as the High Court here accepted his apology, which he made in open court, and ruled the possibility of a misunderstanding between the accused and his counsel.

However, Justice Collin Lawrence Sequerah warned he would not tolerate any attempt to mislead the court as justice is paramount here.

“I accept there may be a miscommunication and also accept the possibility over the wrong choice of words being employed. The court has also taken into account the sincere apology by the accused and an undertaking that it would not happen again.

“Hence, I find there is no case of contempt. However, the court wants everyone to know and be crystal clear that this court would not hesitate in finding and punishing a person for contempt should there be any such violations in the future, as we would not tolerate any attempt to undermine the dignity of the court,” the judge warned.

Earlier, Ahmad Zahid made an open apology to court saying he agreed and apologised to the open court for the confusion caused.

"I do not intend to mislead the court. I have the utmost respect for the judge and this honourable court," he said.

As to the letter calling the meeting that he was supposed to produce, the former deputy prime minister (DPM) said he cannot produce it as the person who informed him of the matter yesterday was not Prime Minister Tan Sri Muhyiddin Yassin's political secretary.

No political secretaries have been appointed yet, thus they have not taken their oath of office before the Yang di-Pertuan Agong.

Earlier, his counsel Hisyam Teh Poh Teik urged the court to accept his client's apology and said the matter was due to a misunderstanding as he thought the meeting was supposed to be yesterday.

"What he said was he intended to meet, and not scheduled to meet. If there was clarity, the whole episode could have been avoided," the senior lawyer said.

Hisyam said as his client had tendered his apology, the court should accept it and give any benefit of the doubt to the accused.

Deputy Public Prosecutor (DPP) Datuk Raja Rozela Raja Toran said the fact that Ahmad Zahid admitted there was no letter despite saying yesterday he would produce one, clearly shows an intent to mislead the court.

“I am glad that he is not able to produce the letter when he insisted there is a letter. On record, he further said a letter was sent to him. The accused has misled the court and [was] making up stories that there is a letter.

“This court has the power under Article 126 of the Federal Constitution and under Order 52 (rule 2) of the Rules of Court 2012 to cite the accused for contempt. Your lordship's power is at the court's discretion and this court must find the accused of committing contempt by insisting he had a good reason to ask for an adjournment,” the DPP submitted.

Yesterday, it was reported that Ahmad Zahid had asked for an adjournment as he was scheduled to meet the eighth prime minister about the cabinet line-up in his capacity as Umno president and BN chairman.

However, in the afternoon, the Prime Minister's Office issued a statement to say that Muhyiddin was not meeting any politicians as he was only meeting the Chief Secretary to the Government Datuk Seri Mohd Zuki Ali and other heads of departments and agencies.

This resulted in Justice Sequerah summoning parties to explain the situation, causing the prosecution to pursue contempt proceedings against the former DPM.

Ahmad Zahid, 67, is facing 47 charges: 12 for criminal breach of trust, eight for graft and 27 for money laundering millions of ringgit.

A punishment for contempt may include a jail term, a fine or possibly both.