SINGAPORE (Feb 15): The government’s tourism voucher coupled with school holidays have boosted the demand for staycation in Singapore hotels, but challenges are still there with the absence of international travellers, according to The Straits Times report.

The Singapore Hotel Association, which comprises 160 members, noted that its member hotels have reported an increase in bookings due to the school holidays and redemption of SingapoRediscovers Vouchers - which are designed to help the core industries of tourism such as hotels, attractions and tours.

For instance, Pan Pacific Hotels Group recorded an average occupancy rate of 60% to 70% in December.

“In the first week after staycations were announced, one of our properties saw 800 nights' worth of room bookings made," she added.

Pan Pacific Hotels Group has over 3,000 rooms across eight properties in Singapore, including Parkroyal Collection Marina Bay which opened in December.

Meanwhile, Raffles Hotel was also fully booked during the festive season in December, said the report.

Besides big hotel chains, boutique hotel chains like Heritage Collection have recorded 75% occupancy across its three properties at Chinatown, Clarke Quay and near City Hall in December.

The report said although the tourism vouchers and school holidays could boost the hotel sector in December, the domestic market is still considered small to provide support to the hotel sector. Hence, some hotels are banking on their food and beverages offerings and events such as weddings to generate revenue.

According to the Singapore Tourism Board, average occupancy rates stood at 55.8% in October and November last year.

Looking for properties to buy or rent? With >150,000 exclusive listings, including undervalued properties, from vetted Pro Agents, you can now easily find the right property on Malaysia's leading property portal EdgeProp! You can also get free past transacted data and use our proprietary Edge Reference Price tool, to make an informed purchase.
SingapoRediscovers Vouchers Hotels Singapore
SHARE
Facebook Twitter 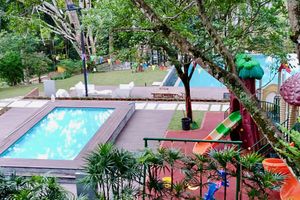