Having been living in the five-bedroom mansion from between 2008 to 2013, the mansion has seen some of Combs' achievements in the entertainment industry where he starred in the television film ‘A Raisin in the Sun’, won the BET Awards and MTV Awards, developed several clothing lines and was also in the F&B business. A three-storey mansion perched on a hill, visitors entering the mansion will start from the top floor where a grand foyer awaits them while dramatic chandeliers and large skylight will greet them. As they enter, their eyes will feast on the astounding view of Los Angeles from the Pacific Ocean to Downtown.

Combs’ bachelor pad comes with five bedrooms and six bathrooms spread over the three-storey mansion with the master suite located on the top floor. The master suite is no ordinary suite as it comes along with a lounge, fireplace, a private balcony and a washroom fully equipped with a white-marble bath, showers, soaking tub and dual vanities. Meanwhile, the middle floor consists of the kitchen, a dining area and a separate seating space that switches an entertainer’s bar and an office.

The first floor is where the living space is located and the living room opens to the large backyard with an infinity pool and sunken spa overlooking the panoramic California skyline. Located in Beverly Crest, the neighbourhood is sited just next to Beverly Hills, Bel Air and Hollywood Hills neighbourhood. Just like its surrounding neighbourhood, Beverly Crest is also the residence to Hollywood’s top celebrities such as Rock Hudson, Mark Wahlberg, Denzel Washington and Sylvester Stallone.

New York-born, Combs ventured into the music industry as a talent director working for stars such as Usher and Mary J. Blige. He then founded his own record company, Bad Boy Entertainment, in 1993 and started producing his own music. 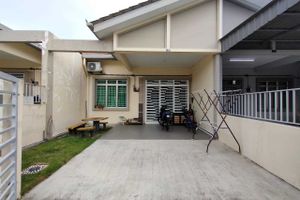