IT was a cool and sunny day in Melbourne as we made our way to the topping-out ceremony of the two-tower Fulton Lane, S P Setia Bhd’s maiden project in Australia. The rite was to mark the beginning of the completion of the development. The 28-storey block is expected to be completed in December while the 45-storey block will be ready next March.

“This topping-out ceremony marks a significant moment for us as Fulton Lane is the defining presence for S P Setia in Melbourne. I could not be happier that we are two months ahead of schedule in the completion of the project,” Voon tells City & Country.

Fulton Lane is close to being fully sold with only one unit left at the time of writing. Launched in November 2011, the project is located near the famed Victoria Market as well as the La Trobe University.

The A$480 million, twin-tower development offers 301 units in a 28-storey block and 503 units in a 45-storey block. The shorter tower has studio, 1-bedroom, 1-bedroom+study, 2-bedroom and 3-bedroom units while the taller tower offers the same unit types as well as 4-bedroom and dual-key units.

There is retail space on the ground floor of the towers with a net lettable area of 1,400 sq m to accommodate convenience stores and F&B outlets. This will be retained by S P Setia for recurring income.

According to Voon, 30% of Fulton Lane’s buyers are Malaysians. “Naturally, we targeted Malaysians as Malaysia is our home base and Fulton Lane is our first project in Australia. After the first launch in Kuala Lumpur two years ago, the world took note. It has been a very good track record for us in the last two years.”

“When we launched the project in Malaysia, other developers were launching their overseas developments [in London and Australia] as well. Usually, at the launch of an overseas project, you would be lucky if you sold five or even one unit. Imagine my surprise when we sold 203 in just one weekend,” laughs Choong.

S P Setia has another project in Melbourne called Parque Melbourne. The A$252 million apartment building is located on a 9,031 sq m site in St Kilda Road. It will have 332 one, two and three-bedroom apartments along with two open-plan penthouses.

With Fulton Lane nearing completion two months ahead of schedule and Parque Melbourne fully sold, S P Setia’s “problem” now is that it is running out of projects to sell. So, what is next for the developer on the Australian front?

“As far as S P Setia is concerned, when we go to a new market, our intention is definitely to stay. It does not make sense to put in so much effort building up the local expertise, brand and network and then abandoning it all after one or two projects, especially as we are so successful. It is only logical that we continue to grow Setia’s presence in Melbourne,” says Voon, adding that the developer plans a third development in Australia, although it has not identified the location yet.

“It is not easy to get a piece of land that suits your development. It takes a lot of planning, sourcing and also luck to get one that is strategically located and in line with your vision. Getting a good piece of land is a challenge for any developer.”

“Getting approvals is also a challenge as they take time, especially when there are many non-governmental organisations involved. Different places have different regulations. In Singapore, for example, it’s very organised. When you buy land, you know what you can and cannot do with it,” Choong chips in.

Voon does, however, hint at Sydney as the developer’s next choice for expansion in Australia because it is one of the more popular cities in the continent for the locals and foreigners.

He remains optimistic although there has been much talk of escalating prices and an overheating property market in Australia. “Demand will continue to rise. Look at the demographic shift — locals are choosing to live in the city compared with 20 years ago when they preferred the suburbs.

“Secondly, people are migrating to Melbourne, which is an attractive city and listed as one of the top liveable cities in the world, not to mention an education hub that attracts thousands of students each year. Parents of the students nowadays are more affluent; they purchase apartments for their children to stay instead of having to rent.”

According to Choong, demand for apartments is healthy while rental growth is still strong. Over the past five years, rental yield has been growing at 5% and capital at about 4.5%.

“The Battersea Power Station project in London will see the official launch of Phase 3 on Oct 31. Phases 1 and 2 did extremely well with almost all the units sold out. In Singapore, we have two projects. The first is 18 Woodsville, which is 96% sold, and the second is Eco Sanctuary, which is located in upper Bukit Timah and is already 75% sold,” says Voon, adding however that the Singapore market is tough now with six to seven rounds of cooling measures.

“We are not really worried as we have sold 75%, thus giving us no problem in completing the project in terms of cash flow. We are still achieving sales of two to three units a week, so the balance of 100 units should be sold by the time the project is completed.”

In Vietnam, S P Setia has two projects — a township and a mixed-use development. Voon says the township is not doing very well because the current economy is very challenging. “Purchasing power is quite limited. Fortunately, we did not come up with the cash for the land; it is a joint venture with the Vietnamese government, which approached us to build the residential component of the development.”

There is also the Qinzhou project in China, which is a joint venture as well as a government-to-government project. S P Setia was tasked with spearheading the development and it represents Malaysia together with Rimbunan Hijau. Malaysia has a 49% stake in the 13,000-acre development while China owns 51%.

No matter where it expands, S P Setia will continue to give its best to the Malaysian market, says Voon. “We are based in Malaysia, so we will continue to expand here. But with the announcement of the budget and the upcoming Goods and Services Tax, I believe the next strategy for S P Setia is to take a step back and breathe.

“The Malaysian market is softening but this doesn’t mean it’s time to forget about property development. There is still a chunk of the market to tap.

“Setia is very fortunate in that we have depth and breadth in our products, such as high-end condominiums, mixed-use developments, townships, affordable housing, light industrial projects as well as gated housing.”

With a presence in Peninsular Malaysia and Sabah, S P Setia has room to manoeuvre and tap any market where there is a vacuum.

In Sabah, it is represented by its RM1.72 billion Aeropod project in Kota Kinabalu. The 60-acre development will feature a hotel, retail outlets, offices and residential units.

Voon says the developer is not looking to increase its activity in the state for the time being. “Population-wise, it is still very small, which means purchasing power is small too. We will continue to focus on Penang, Johor and the Klang Valley, which are the hot spots now.”

Voon, who will be leaving S P Setia at the end of this year, says even though he will not be around, he wishes the company well in all its ventures.

“Many have asked where I am going next but I have yet to give them an answer. I am not being evasive; it is simply because while I am still the acting president and CEO of S P Setia, I will continue to give my best to the company and it will not be professional for me to talk about my plans now,” he explains. “While many feel there is a big change with Tan Sri Liew Kee Sin having left before me, I believe no one is indispensable. Yes I’ve been with the company for 20 odd years, and it is not easy to leave.

“But I believe [management] will be in the capable hands of Datuk C J Khor and I look forward to hearing more good news of S P Setia.” 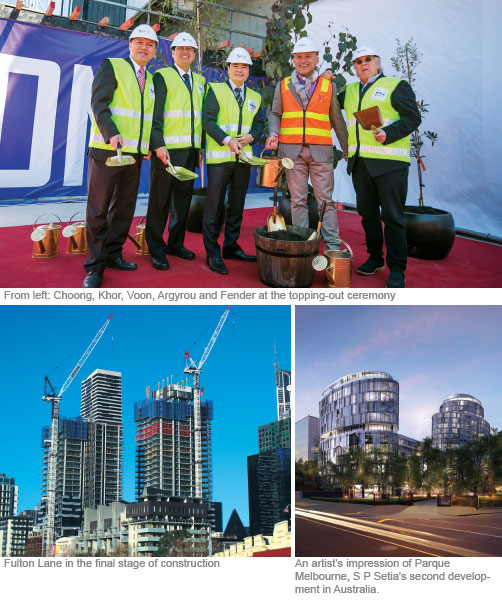 This article first appeared in City & Country, The Edge Malaysia Weekly, on November 3 - 9, 2014.