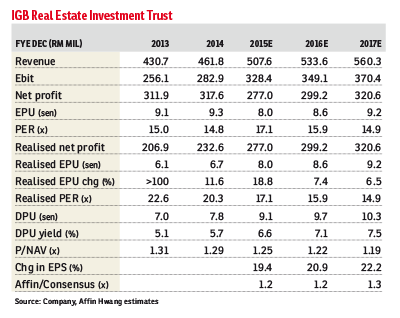 In an announcement to Bursa Malaysia, IGB said Harta Villa Sdn Bhd (HVSB) had today entered into an option agreement with EcoFirst Development Sdn Bhd (EDSB) — a wholly-owned unit of ECB — the right to purchase the land.

Apart from the option agreement, HVSB had on even date entered into an access road and slope works agreement with Curah Bahagia Sdn Bhd (CBSB), to allow the latter to apply for the relevant approvals for the access road to the land.

Under the agreement, CBSB will construct the access road and carry out the slope work on its own expense, for “a consideration of a nominal sum of RM1” to be paid by HVSB.

Currently, the land is occupied by various sub-tenants, whom HVSB had taken steps to evict.

IGB said the disposal of the land represented an “opportune time” to realise a gain from investment, given the significant appreciation in the value of the land since it was first acquired in 1994 at RM36 million.

Assuming the approval from ECB shareholders is received, IGB is expected to register a gain on disposal after tax of RM17.7 million.