PETALING JAYA (April 14): Johawaki Development Sdn Bhd is set to launch the third and final phase of its Avanti Residences in Saujana Permai U17, Shah Alam over two days starting May 7.

“The final phase [with 38 units of semi-detached houses] of the development will be the bigger units, with built-ups from 3,090 sq ft onwards. The gross development value (GDV) of the final phase is around RM40 million to RM50 million,” said Johawaki Development director Mohamad Akmal Datuk Johari at a media briefing today.

According to Akmal, the developer will be giving out special offers to early bird customers on the day of the event.

The first and second phase of the project comprising 22 and 24 units respectively, was launched in September last year.

“The first phase of the project is fully sold while the second phase has a few units left,” said Akmal.

Each semi-dee unit has six bedrooms and five bathrooms.

The project is developed on 20 acres of leasehold land out of a total of 33 acres.

The total GDV of Avanti Residences is RM120 million.

“We are looking to develop shop offices on the remaining 13 acres of land sometime next year,” Akmal added.

Akmal noted that Avanti Residences is accessible via major highways such as the North-South highway, the Guthrie highway and the LATAR highway.

“It takes less than 25 minutes to commute to Shah Alam and 27 minutes to the Jalan Duta toll,” he added.

The show unit is now open for viewing. 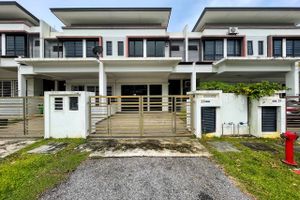