In the note dated April 24, the research firm says it is “not overly concerned about the vacant space left by the previous anchor tenant in Pavilion Tower because the office segment only contributes about 3% of total revenue to Pavilion REIT".

It added that capital expenditure for FY2015 will be approximately RM34 million. This will be used to renovate restrooms in the mall, part of the first floor around the Gourmet Emporium area, and upgrade the air-conditioning system.

Tenancy sales for 1QFY15 are reported as stable. Pavilion REIT management has noted very slow sales in April as consumers tightened their belts but the research firm believes this is a temporary trend as consumers re-adjust their spending habits. The expiration of tenancies in FY2015 for the mall and office are 15% and 22% respectively.

The management foresees no sign of non-renewal for the office segment. For the mall, it plans some relocation of tenants and a revision of the tenant mix. The tenancy of one of its top 10 tenants, Couch (M) Sdn Bhd, is due for renewal in 3QFY15.

Gross revenue for the first quarter of the financial year ending December (1QFY15) of RM105.1 million yielded a net profit of RM60.5 million, accounting for 25% and 25.1% of Hong Leong Investment Bank Bhd’s and consensus forecasts respectively.

Revenue for 1QFY15 grew by 4% year-on-year after completion of asset-enhancement works and higher service charges from May last year. Occupancy rates for mall and office were largely intact in the current quarter.

The report maintains a “hold” recommendation on the REIT and an unchanged target price of RM1.47. Target yield remains at 5.7%, derived from the historical average yield spread of Pavilion REIT and seven-year Malaysian government securities. 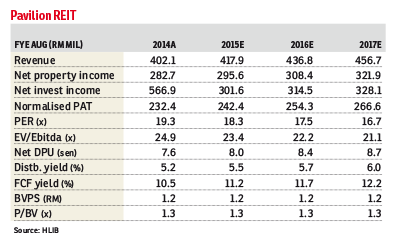 Looking for properties to buy or rent? With >150,000 exclusive listings, including undervalued properties, from vetted Pro Agents, you can now easily find the right property on Malaysia's leading property portal EdgeProp! You can also get free past transacted data and use our proprietary Edge Reference Price tool, to make an informed purchase.
Mall Office Tenancy
SHARE
Facebook Twitter