This is the first in a series of four snapshots on USJ. Look out for part 2 tomorrow.

•    This week, the spotlight falls on the burgeoning non-landed market of the Klang Valley’s USJ township. An extension of the matured Subang Jaya township that was started by the same developer, Sime UEP Bhd, USJ has witnessed a slew of new launches over the past few years, with its popularity also buoyed by its access to highways, Putrajaya and Cyberjaya.

•    Some of USJ’s notable new developments include the 77-acre One City by MCT Consortium Bhd. Other new developments recently launched include You One, Da Men, The Regina, Empire Remix and The Duo.

•    Data analyzed by theedgeproperty.com has yet to reflect these new projects. However, transactions of existing non-landed properties reveal that USJ’s secondary market has seen robust capital appreciation, reflecting its increasing popularity and affordable pricing points.

•    Based on theedgeproperty.com’s analysis of transactions, prices in the secondary market have grown remarkably over the past two years. The average transacted price per square foot (psf) of non-landed residential was RM411 psf in 3Q2014, up 16.8% y-y from RM351 psf in 3Q2013. The preceding year charted even more outstanding price growth, up 34.5% y-y.

•    Total transaction volume for the 12 months to 3Q2014 fell 22.5% from 742 to 575 units. Transaction activity in the secondary market is likely to pick up again with the newer developments reflected.

Curious how much you can borrow? Use LoanCheck to get your maximum loan eligibility from various banks, or LoanReport to get a FREE CTOS/CCRIS credit report.
Sime UEP Bhd USJ Subang Jaya Putrajaya MCT Consortium Bhd
SHARE
Facebook Twitter 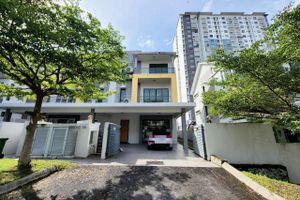