KUALA LUMPUR (June 30): Tadmax Resources Bhd clarified today that the valuation of its Pulau Indah land for sale to 1Malaysia Development Bhd (1MDB) was not subject to approval by the Securities Commission Malaysia (SC).

“Tadmax wishes to clarify that the valuation of land in connection with the company’s sale of its Pulau Indah land in Selangor to Ivory Merge Sdn Bhd (IMSB) was NOT subject to the approval of the Property Valuation Department of the Securities Commission Malaysia,” it said in a filing to Bursa Malaysia today.

The announcement was made in reference to news reports by The Malaysian Insider, The Edge and MalaysiaKini, quoting Tadmax’s previous statement on June 24, that the sale price of the Pulau Indah land at RM21.80 psf was supported by a valuation carried out by an independent valuer, Azmi & Co, and subjected to approval by the Valuation Department of the SC. 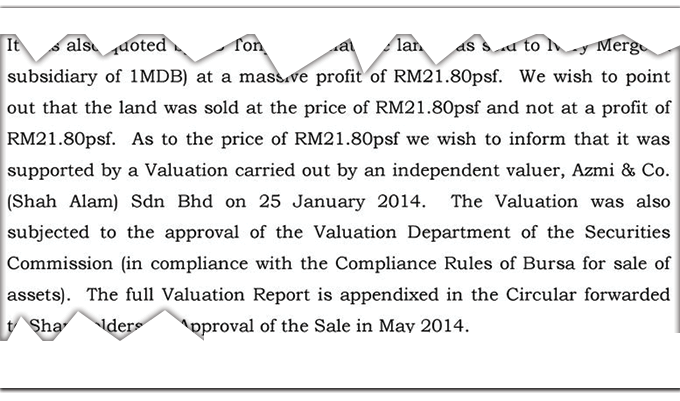 The 154-ha land was sold by Tadmax to IMSB, a wholly-owned subsidiary of 1MDB for RM294.38 million, a 7.2% discount from the original RM317.33 million that was initially agreed upon.

In its statement today, Tadmax said under Bursa Malaysia Securities’ Listing Requirements, the company was required to issue a circular to seek shareholders’ approval for the transaction and to ensure that the valuation certificates and reports submitted together with the draft circular complies with SC Asset Valuation Guidelines.

Tadmax’s announcement came following 1MDB’s announcement earlier today that it planned to appoint a real estate consultant to evaluate proposals relating to the company’s intention to monetise both its Air Itam and Pulau Indah tracts.

“I am pleased to update that we have received significant expressions of interest in both land parcels. Accordingly, 1MDB intends to appoint an independent real estate consultant to assist in reviewing the various proposals. A further announcement providing an update on progress will be made within the next two weeks.

“As part of its strategic review, 1MDB had announced on 18 February 2015 [of] its intention to monetise the company’s land parcels in Air Itam and Pulau Indah, through joint ventures or outright sales. Subsequently, this was confirmed in the rationalisation plan presented to [the] Cabinet on 29 May 2015," Arul said.

On June 17, opposition lawmaker Tony Pua highlighted that the 125-ha land in Pulau Indah was bought by 1MDB from Tadmax after securing a US$150 million (RM540 million) loan from Export Import (EXIM) Bank.

Pua suggested that the transaction was a front to bail out troubled government-linked companies, and that Tadmax sold the land, which was only valued at RM9.93 per square feet (psf) in August 2011, at a massive profit of RM21.80 psf to 1MDB.

Looking for properties to buy or rent? With >150,000 exclusive listings, including undervalued properties, from vetted Pro Agents, you can now easily find the right property on Malaysia's leading property portal EdgeProp! You can also get free past transacted data and use our proprietary Edge Reference Price tool, to make an informed purchase.
Tadmax Resources 1MDB Securities Commission Malaysia Bursa Malaysia
SHARE
Facebook Twitter