KUALA LUMPUR: An estimated RM600 million worth of related mortgage financing from Malaysians for purchase of primarily property investments in London, in the United Kingdom, has retained the city’s supremacy as the most popular destination amongst ultra-high-net-worth individuals (UHNWI), according to Malayan Banking Bhd (Maybank) head of high net worth and affluent banking Eunice Chan at the Knight Frank launch of The Wealth Report 2015 yesterday.

“The country’s largest bank group has seen an incredible surge in overseas loan applications, since the launch of its Maybank overseas mortgage loan scheme and currency offshore property financing for British properties in 2011,” said Chan.

“Despite a fairly slow local market, Malaysia’s UHNWI will see property as the most important asset class and it retains its appeal both in Malaysia and the rest of the world,” said Knight Frank Asia-Pacific head of research Nicholas Holt.

The report reviews the most affluent populations in 108 cities across 97 countries.

Soaring property investments in the United States have led New York to be forecast as the world’s most important city by 2025, taking over the reign of London, according to the the report.

According to Prime International Residential Index (Piri), the US dominates the top end of the ranking in terms of price growth with four cities in the top 10.

“The rise of Asia and its subsequent impact on prime property within the region and beyond has been one of the key narratives highlighted in The Wealth Report. This growth in wealth is certainly impacting prime residential markets across Asia and Australasia, with the region’s key cities and second-home destinations seeing strong price growth over the last five years. This is despite interventions by policymakers in the number of markets, designed to slow price growth and curb foreign ownership.

“Here in Kuala Lumpur, the prime condominium market — which we track for our Piri, saw 0.5% price increase in 2014 — is a very flat market, although we are seeing a price growth in the landed market a little stronger the city,” said Holt.

“Private wealth of US$47billion was invested into the commercial property markets around the world. In Malaysia, the interest of high-net-worth individuals in commercial property is there. In the attitude survey, Malaysian numbers show that its retail comes up with 88% higher than the Asian and global average. Globally, it is the residential investmest that continues to top the list of asset classes UHNWI are interested in,” said Holt.

Knight Frank chief economist James Roberts estimated global commercial real estate sales volume to increase by about 7% in 2014 to around US$619 billion in 2014.

“We see global sales in commercial real estate rising by another 6% in 2015, with value add rising further up the agenda. Value add is any building where the purchaser can grow the investment return via construction, changing to another use like residential, or signing up higher-paying tenants.” 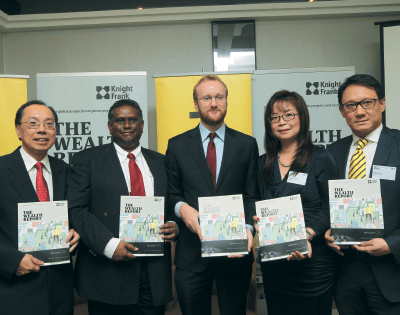