Maintain hold with a target price (TP) of RM9.05: Sime Darby Bhd has announced that it is disposing of its entire 40% stake in Seriemas Development Sdn Bhd to PNB Development Sdn Bhd (owner of the remaining 60% stake in Seriemas) for a cash consideration of RM625 million. Seriemas’ principal business is property development, and its key assets include: i) 11 parcels of vacant land (of which Bangi Estate is in the process of being disposed of); ii) three parcels of land with ongoing developments; and iii) two malls in Kota Seriemas and two hotels in Morib. Sime Darby’s original cost of investment was RM449 million, and the carrying amount was RM411 million as at end of financial year 2016 (FY16). The associate stake contributed RM31 million or around 1% to Sime Darby’s bottom line in FY16.

An independent valuation (dated July 31, 2017) of Sime Darby’s 40% stake in Seriemas in terms of revalued net asset value (RNAV) came to RM1.23 billion. This corroborates a separate valuation (dated July 5, 2017) of the market value of its land and investment properties at RM2.79 billion, thus implying RM1.12 billion for a 40% stake. Factoring in an additional RM120 million cash dividend paid to Sime Darby on June 30, 2017 by Seriemas, the disposal consideration of RM625 million thus implies a valuation discount of 39.4%. Sime Darby expects to record a gain on disposal of around RM305 million net of disposal expenses.

This move is unsurprising, in line with Sime Darby’s ongoing drive to unlock value from its assets. The expected gain of RM305 million (less associate contribution) is around 10% increase to our forecast aggregate FY18 earnings for Sime Darby. However, given the disposal time frame (expected to complete before end-2017), it will ultimately contribute as a one-off gain to the demerged Sime Darby Property.

We think such gain is underpinning the property unit’s higher-end valuation — we value the segment at 15 times price-earnings ratio in our sum-of-parts-based TP of RM9.05. We maintain our “hold” call, pending further developments. — AllianceDBS Research, Aug 2

This article first appeared in The Edge Financial Daily, on Aug 3, 2017. 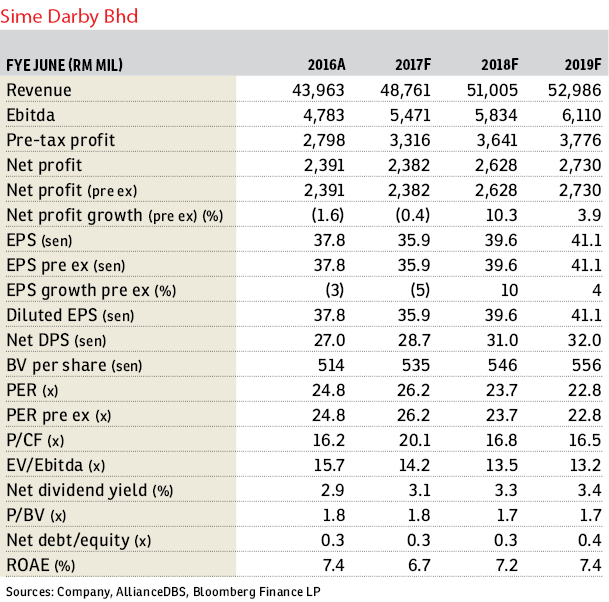 Looking for properties to buy or rent? With >150,000 exclusive listings, including undervalued properties, from vetted Pro Agents, you can now easily find the right property on Malaysia's leading property portal EdgeProp! You can also get free past transacted data and use our proprietary Edge Reference Price tool, to make an informed purchase.
Sime Darby Seriemas Development PNB Development Bangi Morib
SHARE
Facebook Twitter