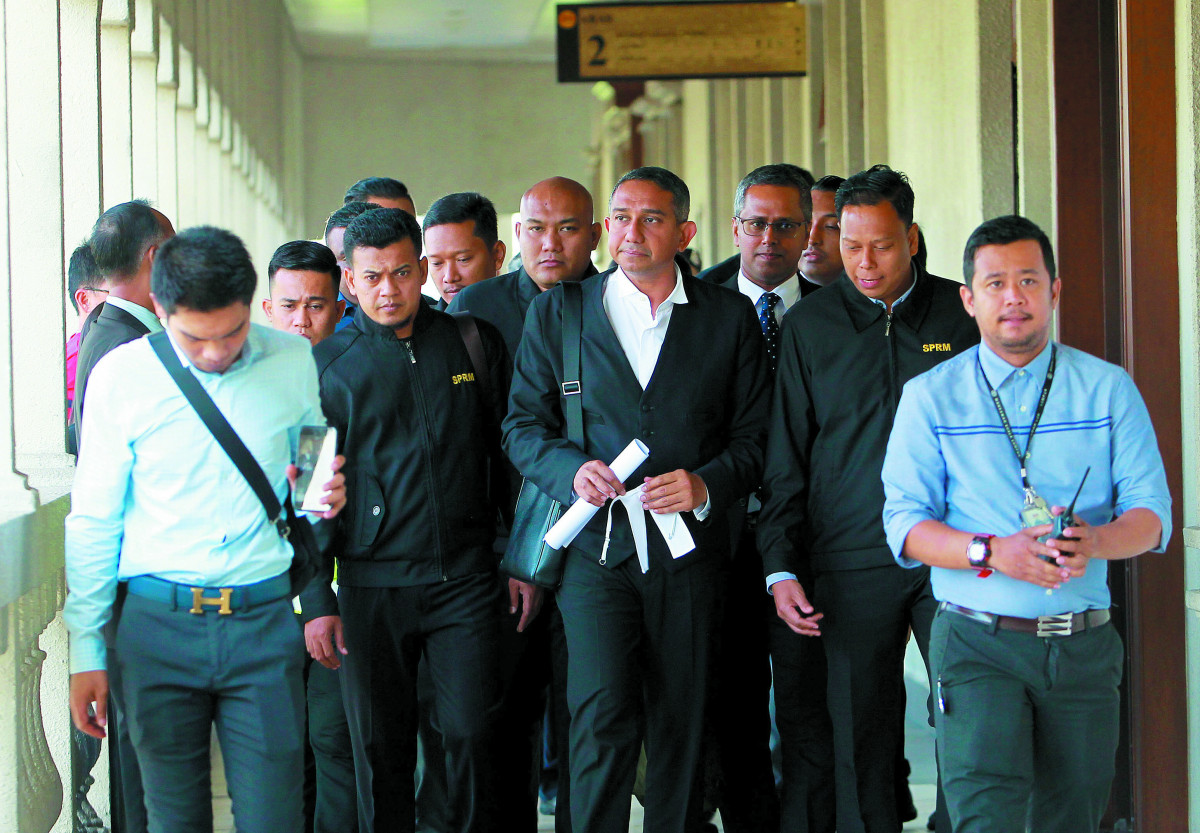 The offence was alleged to have been committed between April 16 and Nov 4, 2014 at CIMB Bank’s Putra World Trade Centre branch.

The second charge was for depositing a sum of RM3.5 million via a cheque written by Najib into the same account.

The offence was alleged to have been committed at the same place on Feb 12, 2015.

Hafarizam, who is the managing partner of HWAM, pleaded not guilty to both charges under Section 4(1)(a) of the Anti-Money Laundering, Anti-Terrorism Financing and Proceeds of Unlawful Activities Act 2001.

He faces a jail term of up to 15 years and could be fined at least five times the sum or value of the proceeds of the unlawful activity for each charge.

Sessions Court Judge Azman Ahmad allowed bail at RM500,000 with one surety and ordered Hafarizam to surrender his passport to the court.

Hafarizam was represented by his lawyer Hasnal Rezua Merican, while the prosecution was led by deputy public prosecutors Ahmad Akram Gharib and Mohamad Mustafa P Kunyalam.

To reporters outside the court, Hafarizam said: “I’m leaving it entirely to my team of lawyers led by Datuk Hasnal Rezua and Datuk Redza Hassan to proffer my defence and I will take this opportunity to clear my name in due course.”

The case is set for mention on March 25.

Hafarizam acted as a legal adviser and is a member of the Umno disciplinary board. He was known to have acted for Najib during the latter’s tenure as prime minister and Umno president in several civil cases.

Earlier, Hafarizam arrived at the Kuala Lumpur Courts Complex around 8.05am, clad in a black suit, and was escorted into the courtroom by officers from the Malaysian Anti-Corruption Commission (MACC).
He was arrested at the MACC headquarters in Putrajaya on Wednesday evening where he had gone to give his statement.

During the hearing yesterday, deputy public prosecutor Akram also told the Sessions Court that a case against Najib’s former media adviser Paul Geoffrey Stadlen, which is linked to Hafarizam’s case, was registered at the Magistrate’s Court on Wednesday.

Akram said the prosecution would apply to have the two cases heard together if Stadlen is brought before the Malaysian courts.

“A warrant of arrest has been issued and if he is successfully brought to court, we will apply for a joint trial of his case and Hafarizam’s case,” he said.

“Steps to trace him have already been taken,” he told the judge, adding that the arrest warrant had been forwarded to Interpol for further action as Stadlen is not in Malaysia.

Akram clarified with reporters that Stadlen has not been charged in absentia as reported by some local media, but merely had his criminal case registered at the Magistrate’s Court in order for an arrest warrant to be issued.

It was previously reported that the former Apco Malaysia boss had managed Najib’s massive press operations.

Stadlen, a British national, had reportedly headed the public relations operations of the Prime Minister’s Office, but this has since been denied by the previous government.

Reporting on the case yesterday, The Guardian newspaper, UK quoted a statement by Stadlen’s lawyers in London, Mishcon de Reya, categorically denying the charges and accusing the Malaysian government of using Stadlen as part of its “political agenda” against Najib.

MACC, in a statement last November, said Stadlen had fled from Malaysia before the 14th General Election was held on May 9. He is believed to have flown to London before heading to an unknown destination.

This article first appeared in The Edge Financial Daily, on Feb 22, 2019.

Curious how much you can borrow? Use LoanCheck to get your maximum loan eligibility from various banks, or LoanReport to get a FREE CTOS/CCRIS credit report.
Datuk Hafarizam Harun Umno Paul Geoffrey Stadlen Stadlen Datuk Seri Najib Razak Money laundering
SHARE
Facebook Twitter